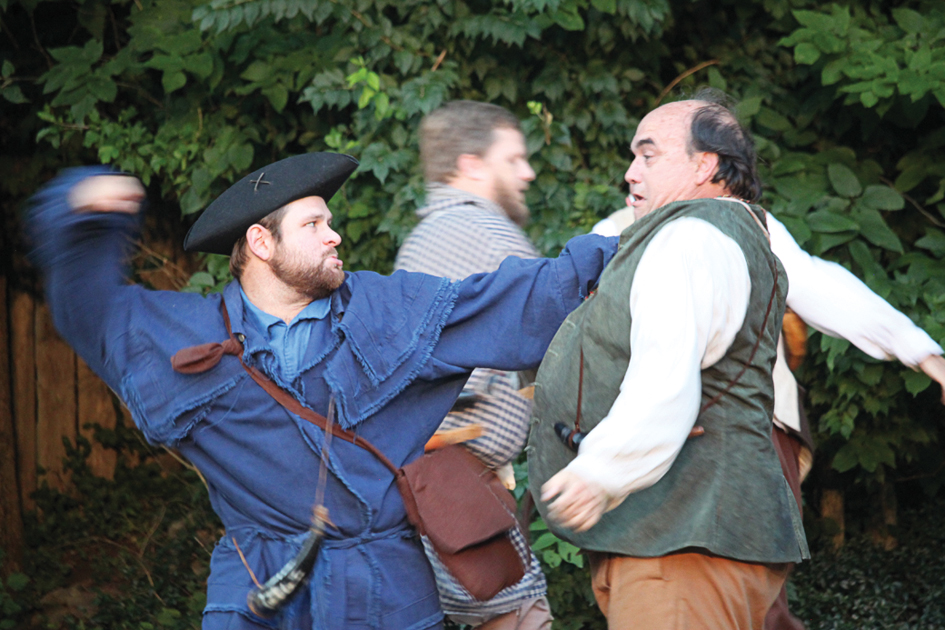 Than Cutler, left, will return as the star of this year’s production of “James Harrod: The Battle For Kentucky,” but performers from Ragged Edge Community Theatre are not returning.

Update: This post has been corrected to reflect some performers associated with Ragged Edge Community Theatre are taking part in this year’s production of “James Harrod: The Battle For Kentucky.”

Outdoor drama is returning to Harrodsburg this summer.

The play, “James Harrod: The Battle For Kentucky” centers on the settlers at Fort Harrod and their struggle for survival against Native Americans, rival claimants and each other. It was first produced in 2012 through a partnership between Old Fort Harrod State Park, the Friends of Old Fort Harrod and Ragged Edge Community Theatre.

But this year, Ragged Edge is sitting out. Not only is the community theater not participating in this year’s production, many of the featured actors associated with Ragged Edge will not appear.

“They didn’t turn up for the audition,” said David Coleman, manager of Old Fort Harrod State Park. “We didn’t turn anyone down, we didn’t tell anyone they couldn’t be involved. But the show must go on.”

Allan Barlow, the managing director at Ragged Edge, said he couldn’t say why some of the actors had not auditioned, but said, for him, the decision to not participate in this year’s production was because of performers’ safety.

Last year, the Ragged Edge board of directors voted to suspend production of the “James Harrod” play and moved an outdoor production of “Joseph and the Amazing Technicolor Dreamcoat” indoors. The state shut down the James Harrod Conference Center, which Ragged Edge used to store costumes for the outdoor drama, because of mold.

“We couldn’t guarantee the safety of the actors and the quality of the performances,” Barlow said.

The roots of the dispute go back to 2012, when the play was created. The popular and long running “Daniel Boone: The Man and the Legend” was last performed in 2004 and the James Harrod Theater sat empty for nearly a decade.

Wanting to return outdoor drama to Harrodsburg, Coleman, using research drawn from George Morgan Chinn’s book, “Kentucky: Settlement and Statehood,” among other sources, created an outline and looked for a co-writer to flesh it out with dialogue.

He took the outline to Tagan Cox, who was then the artistic director of Ragged Edge, and then to Lisa Goodrich, vice president of the Friends of Fort Harrod and a park interpreter, who served as a co-writer.

However, Allan Barlow, who had played Daniel Boone for several seasons and came back to Harrodsburg to play James Harrod, said the script he was given was only eight pages long and took about 17 minutes to act out.

Barlow, who calls himself the “primary author” of the play, takes credit for most of the rest of the play, which runs over 60 pages long and takes 2.5 hours to act out.

Barlow, who has filed for a copyright for his contributions to the play, said he felt “blindsided” when the park decided to bring it back this year. Barlow also denied rumors that he was seeking to sue the park for his part of the play. He said he hasn’t even received confirmation of his copyright from the federal government.

“I’ve never mentioned suing anybody,” said Barlow, who said he was only seeking to protect his rights as the author.

Another part of the dispute between the park and the theater is the ownership of the costumes that the production has accumulated over the last seven years. Those costumes, Barlow said, belong to Ragged Edge, and will not be used in the new production. Coleman asked Ragged Edge for the costumes, but Barlow told him no.

“There are thousands of thousands of dollars worth of costumes, and we weren’t just going to give them away,” Barlow said.

Coleman said they are looking forward to putting on the play this year. While pricing hasn’t been set yet, they are adding tables for parties to reserve. “James Harrod: The Battle for Kentucky” returns to the James Harrod Amphitheater for two weekends, July 18-20 and 25-27. Shows start at 8:30 p.m. Call Old Fort Harrod at 734-3314 or email fortharrod@ky.gov for more information.

It will also be a busy summer for Ragged Edge. They are producing the Abba jukebox musical, “Mamma Mia!” for two weekends, on June 21-23 and June 28-30. For more information, email them at raggededgetheatre@gmail.com or call 734-2389.

Barlow also said Ragged Edge would participate in future productions of “James Harrod,” as long as the amphitheater is safe.

“We still hold out hope the amphitheater will get repaired and improved to the point that quality theater can again be presented there,” he said.