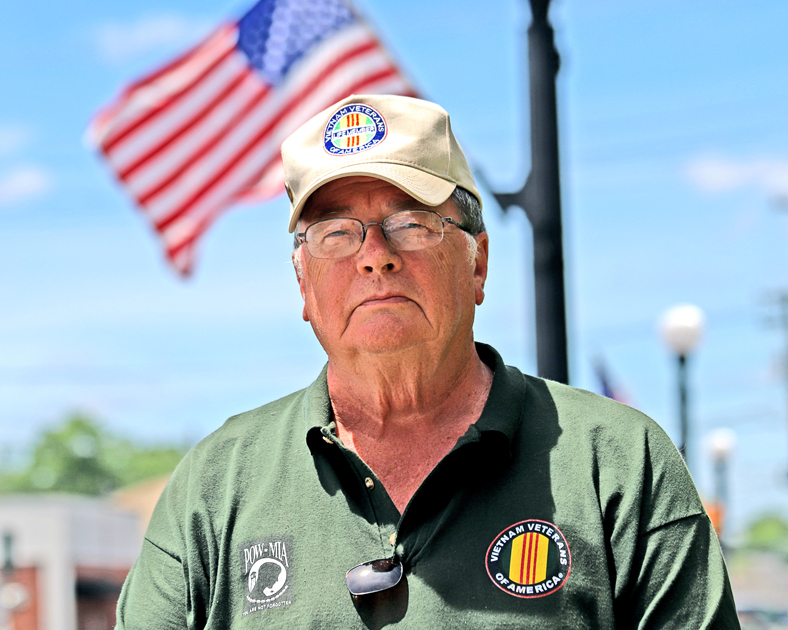 Nearly 50 years after returning from Vietnam, veteran Scott Gillock is still dealing with the after affects. Gillock advises his fellow veterans to sign up for benefits and for his fellow Americans to “remember the veterans.”

For many people, the Vietnam War is ancient history. But for Scott Gillock, who served at Da Nang Air Base for 19 months, the past doesn’t seem so far away.

There are the occasional nightmares. The moments when what Gillock calls “rabbit fever” overtakes him, especially whenever there’s a loud noise.

There is also the fear of disease, which Gillock attributes to toxic weapons such as Agent Orange, which he fears could affect his family for generations to come.

A native of Shelbyville, he joined the United States Air Force after earning a bachelor’s degree at Morehead State University.

“I was kind of misled,” Gillock recalled. He wanted to be a pilot but was trained to be an automatic flight control systems specialist, working on planes like the F4 Phantom, which Gillock called the “top dog” of that era. After graduation, he was offered a job to train other servicemen, but he turned it down.

“I told them if I wanted to teach, I wouldn’t have joined the Air Force,” Gillock recalled.

He hadn’t been deployed yet when his superior officer insisted he return home and celebrate the Christmas holidays with his family, even after he protested that he didn’t have the money to travel.

“Then I realized where I was going,” Gillock said.

After the holidays, he was sent to Da Nang, better known as Rocket City.

It was 1970, and it was a strange time to be sent to Vietnam. “Somebody had called the war off, but they forgot to tell Charlie,” Gillock recalled.

“They weren’t really accurate, but in a city the size of Da Nang, they didn’t have to be,” Gillock said. He said five members of his unit, the 366th Maintenance Squadron, were killed in their bunks right before he shipped out.

The soldiers were dispirited. Many of them sought refuge in drugs. Gillock said one of his first details was using a bulldozer to dispose of the discarded needles.

Then there were the rats, which grew up to 14 inches long and sat up on their haunches and barked at the soldiers whenever they went near the dumpsters.

“They were very protective,” Gillock recalled.

One Marine harnessed a rat and led it around the compound like a pet dog.

“We were desperate for entertainment,” said Gillock, who spent 19 months in Rocket City, and four years in the Air Force.

When he returned home to a nation divided by the war, he didn’t receive a hero’s welcome.

In the Denver airport, “A kid got in my face and it wasn’t good for him,” Gillock said.

People had known about post-traumatic stress disorder since at least World War I, when it was called “shell shock.” But there wasn’t a lot of effort on the military’s part to prepare soldiers for life after wartime.

Gillock said his wife would have to coax him from under cars whenever there was a loud noise.

“It took a long time to get over that rabbit fever,” he said.

Then there was the day he collapsed and had to be rushed to the hospital. When he woke up, he learned he had spent 27 days in a coma.

“They wiped my memory,” Gillock said. “I don’t know what I forgot.”

He also learned his wife was pregnant with their first child.

Gillock attributes the coma to Agent Orange, the defoliant the military sprayed to deny enemy forces ground cover. He noted the military used the same tanks for Agent Orange they used to spray for mosquitoes, so even when you weren’t getting doused, you were still getting quite a dose.

He reeled off the statistics from the war, all the men who were lost. Gillock wondered how many returning servicemen have died from the spraying.

Today, Gillock lives with his wife in Mercer County. They have two children and three grandchildren, and while they are all healthy, he still worries about them.

Agent Orange can damage genes, which many believe has led to a myriad of birth defects among the children and grandchildren of former service members.

While the Veterans’ Administration has provided help to wives and children, groups like the Vietnam Veterans of America are lobbying congress to also provide assistance to grandchildren.

Gillock, who serves as vice-commander of the Veterans of Foreign Wars Post 6935 and as treasurer of the Vietnam Veterans of America, also worries about his fellow veterans.

Any chance he gets, he reminds them to sign up for benefits.

He praises the administration of President Donald Trump for trying to help returning servicemen, including an initiative to allow vets who live more than 30 miles away from a VA hospital to seek treatment with private doctors.

And for those of us who didn’t serve?