Ecigs Use Doubles Among Teenagers 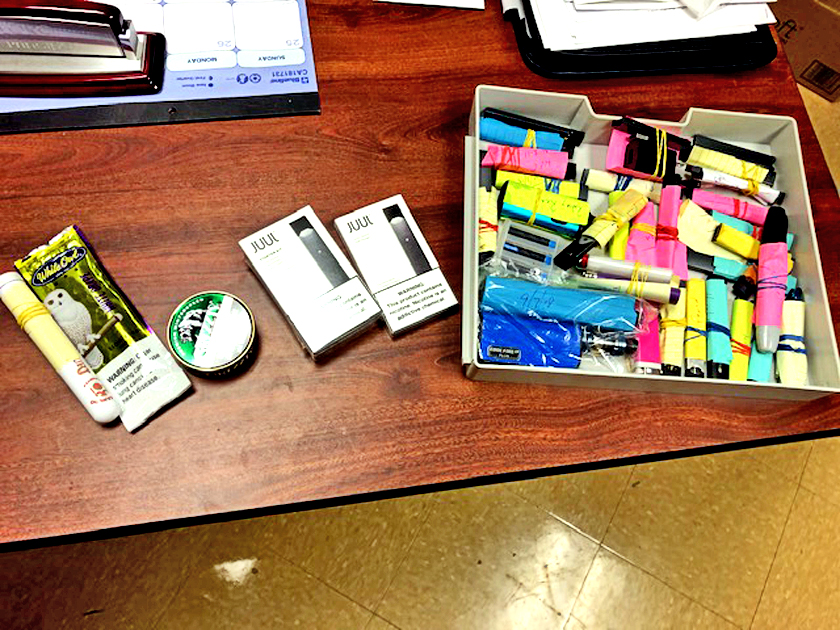 This picture of the items confiscated by a local teacher last fall demonstrates the explosive growth of ecigs among teenagers. That growth has happened in a largely unregulated market. Recently introduced legislation would be the first federal effort to regulate the products, which have been marketed as smoking cessation aids.

The use of electronic cigarettes and vapes by Kentucky teenagers doubled from 2016 to 2018, according to a recent survey, and anti-nicotine advocates are seeking public support for congressional action to curb the rapid growth of vaping among the nation’s youth.

The 2018 Kentucky Incentives for Prevention survey was taken by more than 159,000 students in 151 of the state’s 173 public-school districts, including students here in Mercer County.

While the survey showed continued declines in use of alcohol, cigarettes and smokeless tobacco, it found the percentage of Kentucky high-school seniors who admitted to using e-cigarettes or vapes increased from 12.2 to 26.7 percent. The same trend was found among kids in the tenth, eighth and sixth grades.

The explosive growth of vaping, also known as Juuling, after the most popular brand of vaping kits, is troubling to anti-smoking advocates. Much of the marketing done by vaping manufacturers call the products smoking alternatives, leading many users to not realize they are still consuming nicotine.

Researchers at Stony Brook University in New York found many teenagers who regularly used e-cigarettes said they only vaped nicotine-free products. However, the researchers found that 40-percent of the urine samples submitted by the teenagers tested positive for nicotine.

While many of the manufacturers market their products as  tobacco cessation products, Steer is dubious. She said users are “just trading one bad thing for another.”

“Nicotine will kill you,” Steer said.

Seizures or convulsions have been known as a potential side effect of intentionally or accidentally swallowing e-liquid.  However, according to the FDA, there has been a recent uptick in voluntary reports of adverse experiences with tobacco products that mentioned seizures occurring as a result of vaping.

After examining poison control centers’ reports between 2010 and early 2019, the FDA found a total of 35 reported cases of seizures mentioning use of e-cigarettes. However, the FDA only collects voluntary case reports, meaning there may be more instances of seizure in e-cigarette users than  reported.

The growth of Juuling has happened in a largely unregulated environment, leading to a gold rush as tobacco companies swoop in to gobble up e-cigarette manufacturers. In 2018, Altria, the parent company of Phillip Morris, paid $12.8 billion for a 35-percent stake in Juul.

In April, H.R.2339, titled the “Reversing the Youth Tobacco Epidemic Act of 2019” was introduced in the U.S. House of Representatives.

Advocates including the Campaign for Tobacco Free Kids are asking concerned parents to contact their congressional representatives to co-sponsor the legislation.

Editor’s Note: Special thanks to Kentucky Health News for some of the reporting in this article.