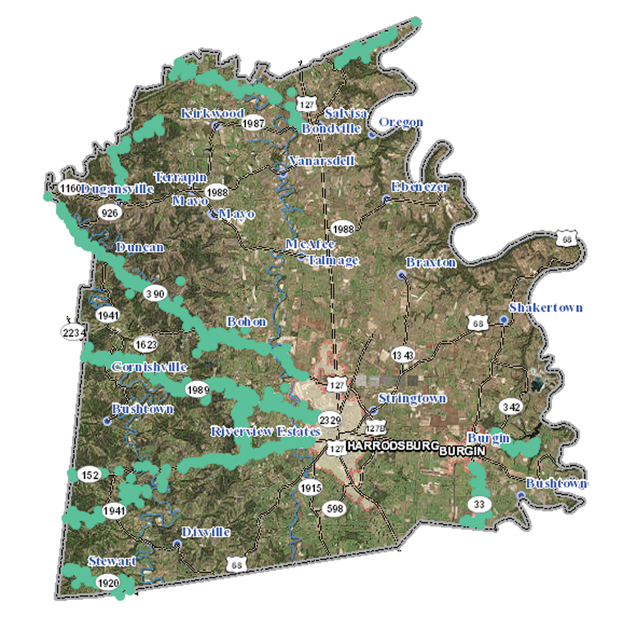 Officials say public safety is the reason nearly a thousand residences in Mercer County will be assigned a new 911 addresses. “It’s not a fun process, but if it saves one live it’s worth it,” said Judge-Executive Milward Dedman.

After two years, the Bluegrass Area Development District has completed their study of 911 addresses. Bluegrass ADD has sent local officials a 63-page Excel spreadsheet listing the addresses that will need to be changed.

Judge-Executive Milward Dedman said the reason behind the change was to better serve public safety.

“We’ve been lobbied by the first responders and our dispatchers at 911 to do this because there are areas where they have trouble finding homes,” Dedman said.

An address number is supposed to correspond—at least roughly—to a property’s location on a given street. However,  as many as 982 addresses in Mercer County don’t.

When the issue was first brought before the Mercer County Fiscal Court in 2017, Sheriff Ernie Kelty said his deputies are often forced to triangulate locations by pinpointing other addresses on the same street.

Driving back and forth endangers lives, said Gail Napier, the director of the 911 call center. Napier said her dispatchers have to make decisions on the fly about which first responder gets sent to which location. And delays in finding proper locations can be fatal.

This hasn’t been an issue in the past because of institutional memory. Everyone knew each other and knew where everyone lived. However, with so much turnover—in dispatchers, in first responders, in property owners—finding the right address has grown more complicated over the years.

She said her department has made changes along the way to try to rectify the problem. “We keep putting numbers in there that don’t fit and we end up in the same situation,” she said.

Judge Dedman said he knew how much trouble it could be to change an address, but he thought the process was worth it.

“It’s going to be an inconvenience for some people, but the most important thing is safety and it’s worth a little bit of inconvenience if it saves one life,” he said.

Now that officials have the information, the next step is to enact an ordinance making the changes official. It will have to be given first readings by both the Harrodsburg City Commission and the Mercer County Fiscal Court. Public comments will be heard when the ordinances are given a second reading.

The most important thing now is to inform homeowners, Dedman said.

“I just want to get the word out there,” he said. “It’s not a fun process, but if it saves one live it’s worth it.”

Homeowners can get a look at the addresses that will be affected on an interactive map prepared by Bluegrass ADD. The map can be found online at https://maps2.bgadd.org/mercer/e911/.