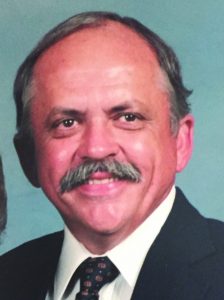 Ed was born on March 7, 1943, in Frankfort. He was the son of Eloise and Edward Sweasy.

He retired from IBM and later, from Four Roses Distillery. On June 1, 1962, he married Patricia Rogers Sweasy. They have two children, Candice Sweasy and Kevin Sweasy.

Ed had a passion for hunting, fishing, farming and the outdoors. He also loved woodworking in his backyard playhouse. He enjoyed making spoons and Shaker boxes and many other special pieces that are much loved and admired by family and friends. He was known for his quick wit, his infectious smile and laughter, and his kind and compassionate spirit.

Ed was preceded in death by his father, Edward, and his mother, Eloise. He is survived by his wife of 56 years, Patricia; his two children, Candice and Kevin; his brother Jackie (LaJaun); sisters and brothers-in-law and many nieces and nephews.

A celebration of life was held on Friday, April 26, at Ritchie and Peach Funeral Home, 701 N. Main Street, Lawrenceburg.

Expressions of sympathy may be sent to the family at  www.ritchieandpeach.com.