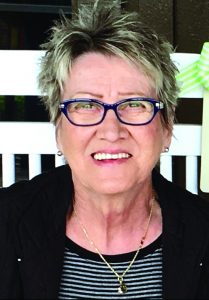 Born Nov. 17, 1943, in Harrodsburg, she was the daughter of the late Frank and Mary Lane Goodlett.

She retired as administrative support for the Cabinet for Family Health Services and was a member of Fellowship Baptist Church. She had also worked for Mercer Senior Citizens and was Mercer County ombudsman for the Kentucky Department of Aging.

She was preceded in death by her brothers, Harold, Frank and Donnie Goodlett; half-brothers James, Kenneth and Paul Goodlett, and Bill, Kenneth and James “Frog” Raley, and one half-sister, Alma Goodlett.

Funeral services were held Sunday, Apr. 28, 2019, at the Ransdell Funeral Chapel with James Harley and Brad King officiating. Burial was in the Spring Hill Cemetery.