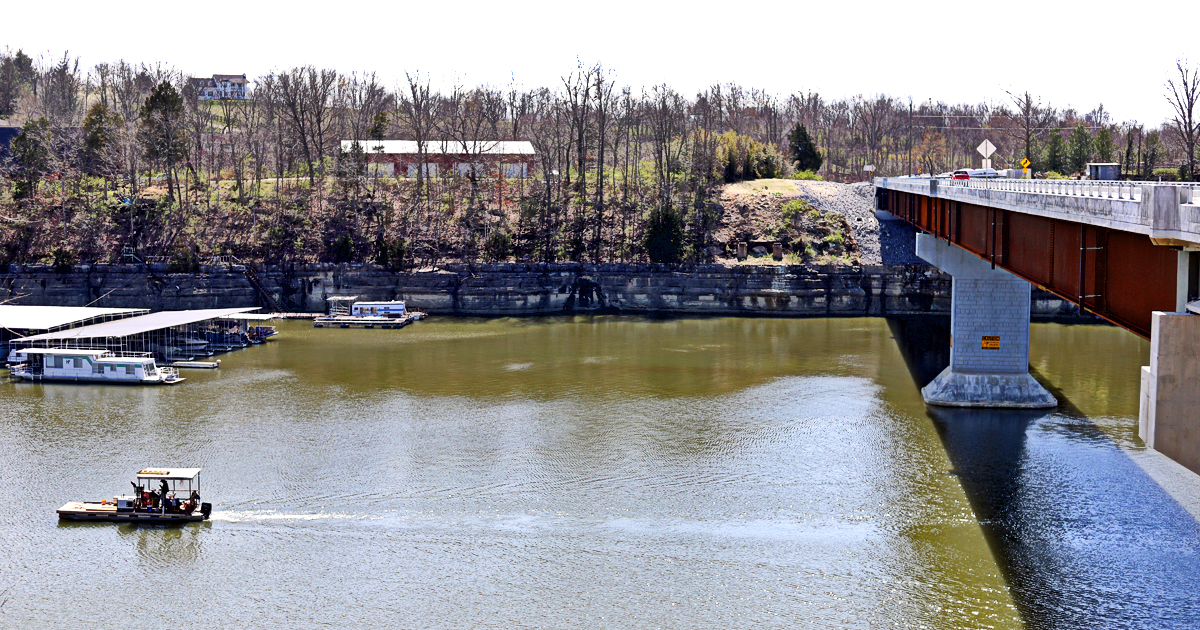 With the new Kennedy Mill Bridge open to traffic, it’s full steam ahead for local marinas this year.

The temperatures are rising and the daffodils are blossoming. It’s the time of year when people start dreaming about spending time on Herrington Lake.

And perhaps no one is looking forward to the opening of lake season more than local marina owners.

This year promises to be different. It will be the first season in years when no one has to worry about the Kennedy Mill Bridge closing. When the new bridge  opened last December, it was nearly a year ahead of schedule, but still too late to save the 2018 season. Some marina owners said it cost them up to 20-percent of their business last year.

“It’s a beautiful bridge,” said Megan Lee Jones of Kamp Kennedy Marina. “We are hoping to have a good year.”

Kamp Kennedy is opening for weekends starting on Friday, April 12. They will open up full time starting on Memorial Day weekend.

With the bridge open, all marina owners and other local businesses along the lake have to worry about is the weather.

While it is a mixed bag as far as the weather forecast for this year goes, the new bridge  means for the first time in years, travelers won’t have a reason to look for entertainment somewhere else on the lake.

“We are excited,” said Tona Tudor. She and her husband, who live on the Mercer County side of the lake, own Sunset Grill and Marina, which is located on the Garrard County. The opening of the new bridge doesn’t just make it easier for customers from Mercer County to get to their marina, it also makes it a whole lot easier for the Tudors and their employees to get to work.

“It’s going to be a great summer,” Tudor said.

Sunset will be open Fridays and Saturdays starting Friday, May 3. It will open for lunch and dinner hours starting Memorial Day weekend.

Paul Barnes, the owner of Chimney Rock Marina and Campground, also thinks the new bridge promises a better season than in recent years.

“I think it’ll help,” said Barnes, who has criticized the way the state handled bridge maintenance in the past.

Last May, the lake level was dropped to 720 feet to ease construction of the replacement bridge. All but two of the local marinas were left high and dry right before Memorial Day.

But that’s all water under the bridge, so to speak.  Currently Herrington Lake is  at a little over 730 feet and the bridge is open.

“It’ll be good for this year,” Barnes said.

Chimney Rock will be open weekends starting on Derby Day, Saturday, May 4. Starting Memorial Day weekend, the grill will be open every day except Monday.

Another reason  the lake is looking good is due to the work of the Herrington Lake Conservation League, who send out a crew to clean the lake from April to October. In a typical year, the crew can remove as much as 18 40-cubic-yard dumpster loads and five 30-cubic-yard dumpster loads, mostly manmade materials. That doesn’t account for the natural wood recovered, which is burned.

In addition to the chance to socialize, there will also be a recap of 2018 activities and a preview of 2019 events as well as information on Herrington Lake’s water quality

Each attendee will receive one ticket to be entered in a drawing for prizes.