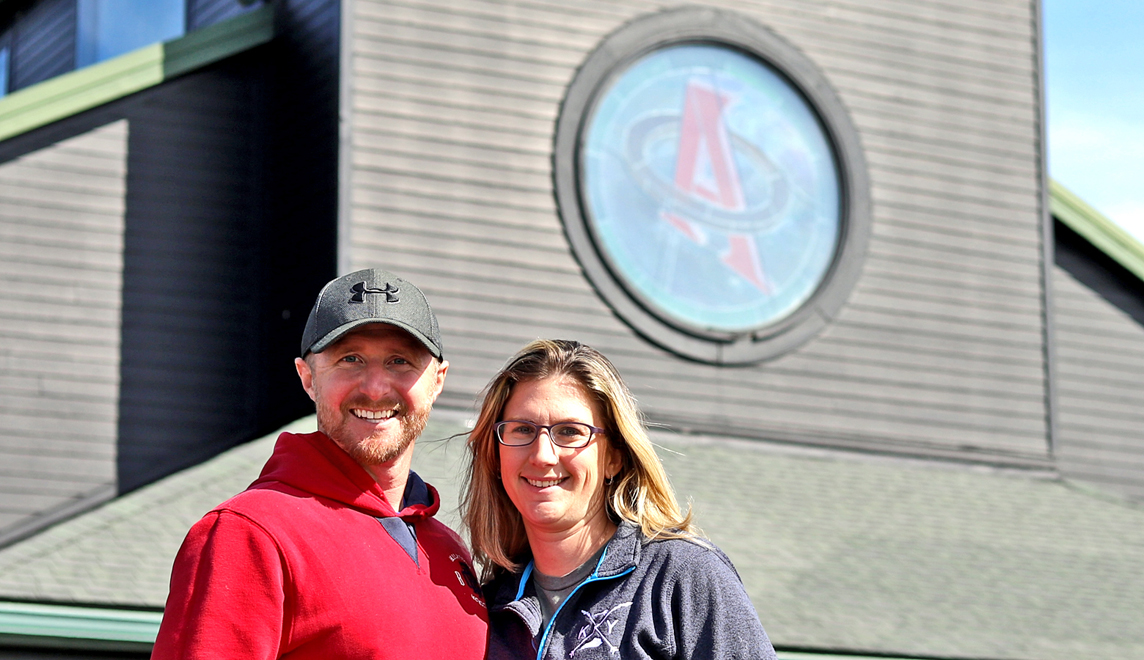 John and Erin Lyons are in the process of turning the former Anderson Circle Show Barn, which sits off U.S. 127, into the Show Barn at Daynabrook Farms. The couple say they have already booked two weddings and one corporate event. They plan to open the Show Barn in April.

One of the best known properties in Mercer County is getting a new lease on life.

John and Erin Lyons, the owners of Daynabrook Greenhouse and Garden Center bought the headquarters of Anderson Circle Farms in February. The couple is currently in the process of turning the building formerly known as the cow palace into an event space called the Show Barn at Daynabrook Farms.

John Lyons said they plan to rent out the Show Barn for weddings and corporate events. They hope to host an open house for the public by May.

“We’ll be glad to show people around,” Lyons said.

Since buying the former Anderson Circle Farm in February, John and Erin Lyons have been busy rehabbing the interior of the Show Barn, adding new lighting fixtures, ceilings and paint as well as a pavilion with fire pits.

The barn sits on a 30-acre lot. The couple are hoping to purchase an additional 12-14 acres within the next month.

The couple has owned Daynabrook since 2011. They said they plan to move their greenhouses from Hopewell Road to the new location by 2020.

While the Show Barn is well-located—Lyons noted it is only eight minutes away from the  Bluegrass Parkway, 25 minutes from the Blue Grass Airport in Lexington and 45 minutes from Louisville—that’s not the only reason it was attractive.

“It’s a well-known, iconic place,” John Lyons said. “It was designed by a Mercer County guy who had a vision.”

That guy was Ralph Anderson, who founded Belcan Corporation of Cincinnati in 1958, which he built into one of the nation’s largest engineering firms. Anderson purchased the first plot of land which would grow into Anderson Circle Farms in 1967. He died in 2010 at the age of 86, and his farm, which at that point spanned nearly 6,000 acres, was sold and split up.

Lyons said he and his wife have always had a dream of opening their property up for agricultural tourism.

“We wanted to do it while they were still young,” said Lyons, whose two daughters, Kylee, 7, and Emery, 3, were riding around the farm on bicycles on Monday.

The family have been busy renovating the 15,000 square-foot Show Barn, updating the interior with new paint, chandeliers and new ceilings. They are currently in the process of building a pavilion with fire pits out front. Lyons said there has been a lot of interest in what they’re doing with the farm.

The couple has worked with local businesses while fixing up the Show Barn. They intend to use caterers and other local services for events. “We hope to bring some business here to Mercer County,” Lyons said. “Hopefully, a lot of people will get helped.”

For more information about the Show Barn at Daynabrook Farms, check out their Facebook page. To book the Show Barn for an event, call Kelly Gray at 859-691-0161.