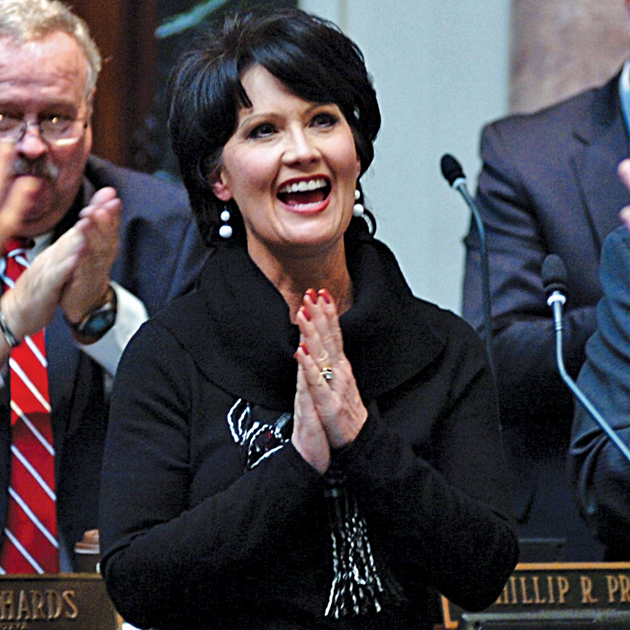 Rep. Kim King underwent surgery to remove a spinal tumor shortly after winning reelection in November. She recovered in time for the start of the new legislative session.

Kim King has represented Mercer County in the Kentucky House of Representatives for almost a decade. She knows the halls of the state Capitol by heart and has cast hundreds of votes on the House floor. But this year’s legislative session takes on a different meaning. Just four months ago, she learned that a rare, life-threatening tumor had overtaken 90 percent of her cervical spinal cord.

King said the symptoms first appeared about five years ago.

“My family and I went out on our farm to shoot pistols, and I couldn’t pull the trigger,” she said. “Everyone else could, but my fingers just wouldn’t work.”

The issues slowly progressed. King started to develop tingling in her fingers and a burning sensation in her shoulders and neck. Eventually, she couldn’t open the door of their tractor—her fingers just couldn’t grab onto the handle. By last summer, she was having significant pain and lost a lot of feeling in her extremities.

“I really thought I had a pinched nerve,” she said.

Her husband, Cary, underwent back surgery in October 2018. On Nov. 1, the couple visited Dr. Charles H. Crawford, an orthopedic spine surgeon with Norton Leatherman Spine, for Cary’s follow-up. When King mentioned her own pain and numbness, Dr. Crawford ordered an MRI.

The test revealed King had a massive tumor growing inside her cervical spinal cord. “I could tell by the concern in Dr. Crawford’s voice that something was really wrong,” King said.

She was referred to Norton Neuroscience Institute, where she was seen by Dr. Mahan Ghiassi, a spinal oncology specialist.

“It’s one of the larger spine tumors I’ve seen in this area,” Dr. Ghiassi said.

Intramedullary spinal cord tumors are rare—they make up less than one percent of all central nervous system tumors. Depending on the type, intramedullary spinal cord tumors can be benign or malignant, but both can lead to paralysis or death given the location. As the tumor grows, the patient eventually becomes paralyzed. If the tumor is untreated, the person will lose the ability to breathe. The only effective treatment is surgery to remove the tumor.

“Spine tumors often take time to diagnose, because back and neck pain is often caused by other factors, and people deal with it for years,” Ghiassi said. “By the time we saw Kim, paralysis was a real threat. We needed to act quickly.”

On Nov. 1, Kim was diagnosed. On Nov. 6, she won her fifth term as a state representative. On Nov. 13, she was at Norton Brownsboro Hospital ready to undergo surgery.

It wasn’t an easy decision to make.

“I approached the decision to have surgery like I do a bill on the House floor,” King said. “I research, pore over the details and, above all, pray. Plus, it didn’t hurt that Dr. Ghiassi was very thorough in explaining my options and answering my questions.”

To perform the seven-hour microsurgery, Ghiassi and his co-surgeon and brother, Dr. Mayshan Ghiassi, also a neurosurgeon at Norton, used intraoperative navigation and intraoperative continuous spinal cord monitoring, a new technique only used by a few hospital systems across the country. Intraoperative monitoring allows surgeons to receive real-time analysis of spinal function during the procedure. This allows them to be more aggressive in removing the tumor without hurting healthy parts of the spinal cord.

“Given the complexity and high-density vital neural tissue within the spinal cord, sub-millimeter precision can mean the difference between a successful surgery and paralyses,” Ghiassi said.

King now begins her days with physical and occupational therapy and then spends the afternoon reviewing bills, casting votes and meeting with constituents in Frankfort. She’s regaining the feeling in her arms and her strength is returning. And though she still has to work on some motor skills like dialing a cellphone or brushing her hair, King and her doctors are confident she’ll fully recover.

“I’m so glad to be back at work and representing my district,” King said. “This is what I was meant to do, and people on both sides of the aisle have been very supportive.”

King is a person of faith who believes God works in mysterious ways.

“Had it not been for the perfect timing of my husband’s surgery, my comment to Dr. Crawford and his connection with the Norton Neuroscience Institute, who knows what would have happened to me?” she said.

But she knows her faith in her doctors also paid off.

“My experience with Norton Healthcare has been wonderful,” she said. “Everyone was so detailed and compassionate. In fact, since my surgery, my husband and I have recommended Norton to a half-dozen folks in Eastern Kentucky. It’s worth the drive.”

For Dr. Ghiassi, the admiration is mutual.

“Kim is amazing and has worked very hard to recover,” he said. “I’m so happy that she can return to work and continue to serve the citizens of Kentucky.”