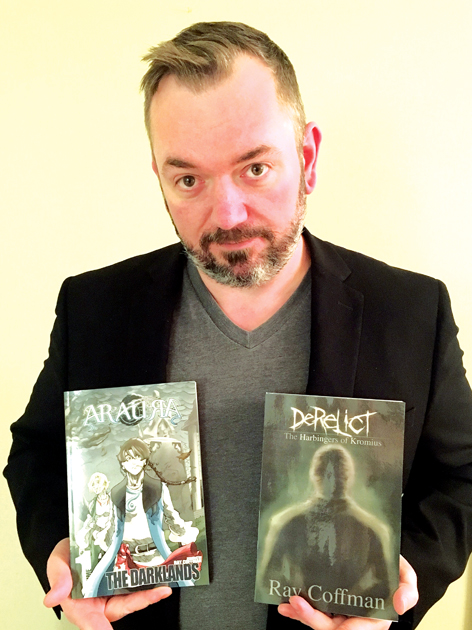 Author Ray Coffman set his paranormal horror novel, “Derelict: Harbingers of Kromius.” Coffman’s book is set to be released on Monday, March 18, and an event called “Horror Comes Home” will be held in Olde Towne Park on Saturday, March 30.

“Derelict” is a suspense filled horror and sci-fi novel set in Harrodsburg that draws on local lore and historic landmarks to bring the town to life.

A self-described big dreamer, Coffman said he has been an artist and writer for most of his adult life. Leaving Mercer County in 1999 to pursue dreams of becoming a successful artist and storyteller, he returned to Frankfort four years ago writing graphic novels and comics. He started his “Derelict” novel two years ago and plans for this tale to be a series of novels centered on Harrodsburg.

“The book portrays Harrodsburg as a hot bed of paranormal activity with a covert research organization tracking it underground,” said Coffman. “Eric, the protagonist of the book, is pulled into a paranormal plot in which an ancient and horrifying evil sleeping beneath ground begins to awaken.”

Coffman said he spent a good bit of time revisiting the streets and sites of Harrodsburg to ensure accuracy in the book’s settings.

“This really is a love letter book to my home. A love letter from a sci-fi/ horror writer, but a love letter,” said Coffman. “People are going to recognize roads, landmarks and lore while reading the book.”

Coffman said he spent time developing the setting but also the characters of the book. He hopes readers will identify with the characters and feel the impact of their loss while reading.

“This is the first book in a series,” said Coffman. “There is a prequel that incorporates Harrodsburg’s unique history in the works.”

The prequel is titled “Derelict: The Tale of Old Town” and it revolves around the account of James Harrod and his settlers.  Coffman said it would be 70 percent historically accurate, answering some questions that readers may have after reading the first novel.

“If it were to be optioned for a live action production, my intent is that would need to be shot in Harrodsburg and in the surrounding areas of Mercer County,” said Coffman. “I don’t want to get too far ahead myself on this one, the book still needs to be a hit,”

Coffman said his mother, Debbie Coffman inspired him to write horror stories before she passed away in 2018 from cancer.

“She was a huge horror fan,” said Coffman. “During her final few years, I would drive her places she needed to go and she always loved to hear about the “scary book” I was working on. So, when we would pass by a landmark in Harrodsburg I would say a little something about a ghost story here, or a creature that hides there. She was always vastly entertained by that.”

Coffman has seen success with his art and writing with a graphic novel titled “Araura.”

“Araura started as my first foray into writing. It’s a coming of age story geared toward young adults, but I have people in their fifties that read it,” said Coffman. “I was recognized for my art in school. So, in a way, it all started in some quiet desk in the back of a Mercer County Elementary school classroom where I was either drawing or writing stories.”

Coffman said his father, Jim Coffman also has been supportive of his career.

“My dad was always cool about letting me be the weird kid and though he didn’t always get what I was talking about, always supported my creative side,” said Coffman.

Derelict novel’s Facebook page already includes videos that correlate with the book and he plans to expand the videos after the release.

“I really love the area I grew up in. I wanted to do something special to celebrate it. So I’m bringing a horror tale to my beloved little hometown,” said Coffman. “I have made a special effort to recall all of the old ghost stories I could remember from the area and incorporate them in some way into the paranormal aspect of the tale.”