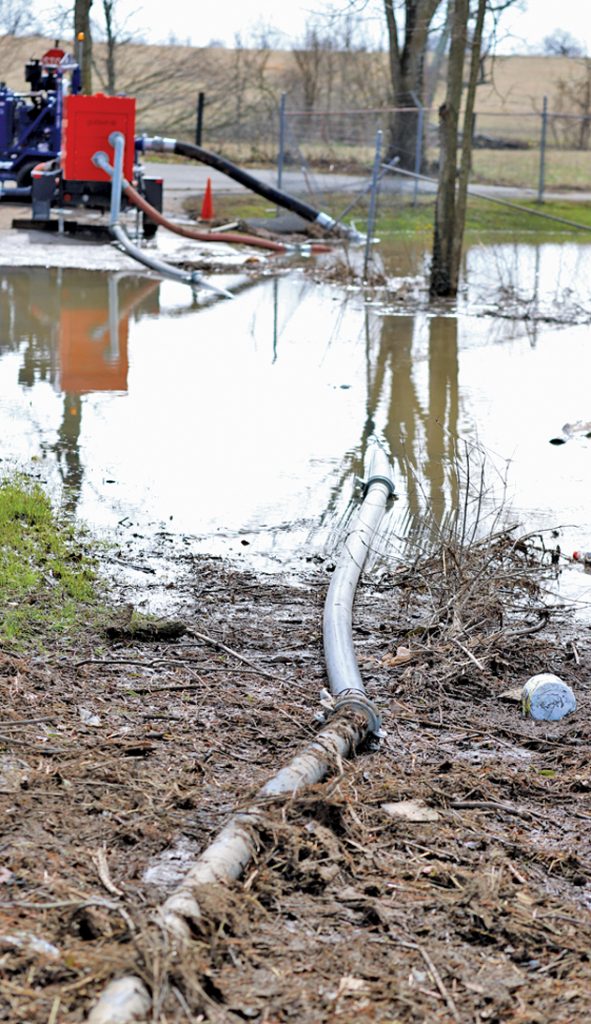 Burgin was hit again with flooding this past weekend as a series of storms roared across the state. Officials are wondering when, and if, the bad weather will truly end.

A series of storms left parts of Mercer County submerged this weekend. The increased rate of flooding has officials worrying what comes next.

Approximately 2,400 people in Eastern and Southern Kentucky were left without power while mudslides and high water closed roads across Kentucky, including New Dixville Road between US 68 and Kentucky Route 152, which was closed for a day and a half.

But nowhere has been hit worse than Burgin. On Tuesday, part of the city along Water Street still remained underwater.

“It was as bad as it’s ever been,” said Mayor Jim Caldwell. That part of the city repeatedly flooded in 2018, which is one of the wettest years in local history. Caldwell said that, after all the recent rain, the water simply has nowhere else to go.

“The system was already full. The ground was already saturated. Every drop of rain ended up in that bottom,” Caldwell said.

The mayor is thankful to Harrodsburg, which has loaned Burgin a pump and has loaned the sanitation district a camera to track the way the water flows into Burgin’s sewer system.

Kentucky Utilities opened the spillways Sunday to steady the elevation on Herrington Lake, which was at 755 feet. The winter pool is 725.

Sanford said sanitation district workers spent two days last week going over the sewer. Starting on the north end of Burgin, they did flow observations to record the impact of flooding. Sanford said they found three areas with little or no flow.

Those areas are all served by pipes installed by Todd Johnson Contracting Inc. of Danville, the most notorious of the three firms hired to build Burgin’s sewer system. Johnson and the sanitation district are currently embroiled in a lawsuit, with the contractor arguing the district did not provide accurate documentation before construction began, while the district is arguing that Johnson did not perform proper due diligence before the project began.

Sanford said the two parties met Friday, but he said Johnson was working to correct the issue.

But the ultimate issue, Sanford said, is all the rain.

“We have infrastructure underwater,” he said.

The sewer was not designed to handle storm water. He said if Burgin installed a storm sewer, it would eliminate a lot of the problems both the city and the sanitation district are facing.

“A lot of headaches would go away,” Sanford said.

However, a storm sewer could be even more expensive to install in Burgin than the sewer system, which cost over $9.2-million.

On Monday, Gov. Matt Bevin declared a statewide emergency in response to widespread flooding and critical infrastructure damage across the Commonwealth due to this weekend’s heavy rains. The executive order enables the mobilization of state resources to be to be utilized in support of cities and counties as needed.

According to a press release, the Kentucky Division of Emergency Management has received 36 county and 11 city state of emergency declarations.

But there is another issue facing authorities here in Mercer County and across the commonwealth. Storms like the ones that struck here Saturday were once defined as 500-year floods, meaning there was a less than one percent chance of another storm of similar magnitude happening within 500 years. But these storms are happening much more frequently.