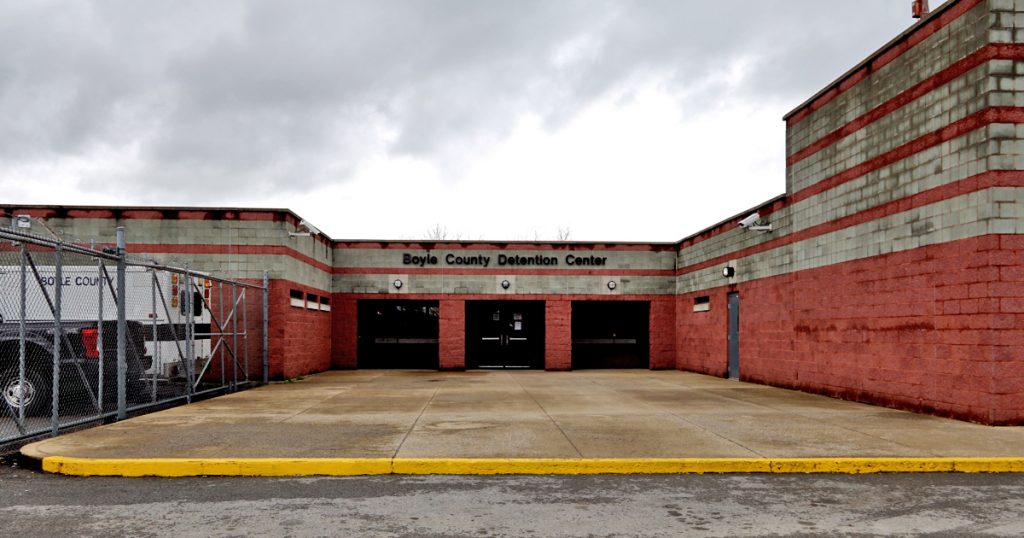 Some officials are concerned about the potential for adding to overcrowding at Boyle County Detention Center after Boyle County jailer Brian Swofford decided to stop accepting money bonds. The debate may end up being moot as the Kentucky legislature is considering a bill to eliminate money bonds almost entirely.

Move Is Question Amid Overcrowding Concerns

At a time when Boyle County Detention Center is under fire for the way offenders are processed, newly elected Boyle County Jailer Brian Wofford has changed the way the detention center handles financial bonds.

Officers will no longer handle financial bonds Monday through Friday. Arrestees hoping to bond out will have to go through the local courts. Offenders arrested after 4:30 p.m. would have to bond out at court the next morning.

The courthouse only accepts bond payments 8 a.m.–4:30 p.m. Monday through Friday. Jail staff will continue to handle financial bonds on weekends and holidays when the courts are closed, Wofford said.

The move comes not long after a report which blamed overcrowding at the regional jail not on the exploding drug problem in Kentucky but on how slowly criminal cases are processed in Mercer and Boyle Counties. In particular, the report compiled by Brandstetter Carroll Inc. of Lexington blamed jail overcrowding on slow felony case processing, an apparent refusal to set non-financial bonds for low-level offenders and offenders having their bonds revoked and being rearrested after being indicted by grand jury.

At last Friday’s meeting of the Mercer-Boyle County Joint Jail Committee, Mercer County Attorney Ted Dean objected to the decision to leave financial bonds in the hands of the courts.

“I think it’s a terrible idea. Point blank,” said Dean, who asked why Wofford had made the decision without first running it before the joint jail committee.

Wofford, who, earlier that day had been elected to lead the Criminal Justice Coordinating Committee, said it was within his power as an elected jailer. He said he had spoken with the local judges, and they were okay with it.

According to the recently completed study, the detention center—which was originally designed to hold 220 inmates—has been overcrowded for at least 16 years. Even when the jail population is close to the designed capacity, the jail has no room to isolate inmates who are either detoxxing, undergoing mental health breakdowns or are sick. Kenneth Ray, one of the consultants with Brandstetter Carroll who produced the report, called the situation at the detention center a “tinderbox.”

Dean said, at a time when both counties are looking at easing overcrowding at jail it does not make sense to extend offenders’ times in detention. Under the new policy, it could take up to two days in jail for someone arrested at 5 p.m. And under current state policy, being after midnight counts as a second day, meaning the counties would have to pay two days per diem—$31 per day—for someone in jail only a few hours.

“We’ve got people who could post a bond at five in the afternoon,” Dean said. “We should make it easier to get out of the facility and not harder.”

Dean said he would be willing to work with Wofford on working out another situation. In the past, a retired police officer was employed to collect financial bonds.

Dean also encouraged Wofford and Boyle officials to look at the interlocal agreement, which saysthe decision needed to be brought before the Boyle County Fiscal Court for approval.

Wofford said he had to make the move because he was short staffed. On Monday, he told the Danville Advocate Messenger that his deputies were dealing with thousands of dollars in money that had to be counted twice, in addition to their other duties.

“If they come up short, the deputy who is counting it is responsible for it,” Wofford is quoted as saying. “There’s paperwork to do; it takes time.”

At the joint jail meeting, Wofford said it was possible, when staffing numbers were up and training was completed, that they would revisit the issue.

However, it is not clear how much longer financial bonds will be around. A bill before the Kentucky legislature this year could help end the use of money bail.

House Bill 94, sponsored by Rep. John Blanton, a Republican and a retired state trooper, would reduce, but not completely eliminate financial bonds, instead requiring “a detention hearing for any defendant determined by the court to be a danger to the public if released.”

However, locally, the trend has been to make offenders pay to be released. Branstetter Carroll researchers found that from 2010 to 2017, only 4 percent of Boyle County defendants and 3 percent of Mercer County defendants were able to leave jail without paying money. This is less than 10-percent of the state average.

The next meeting of the Mercer-Boyle County Joint Jail Committee will be on Friday, March 8, at 1:30 p.m. at the Boyle County Courthouse.