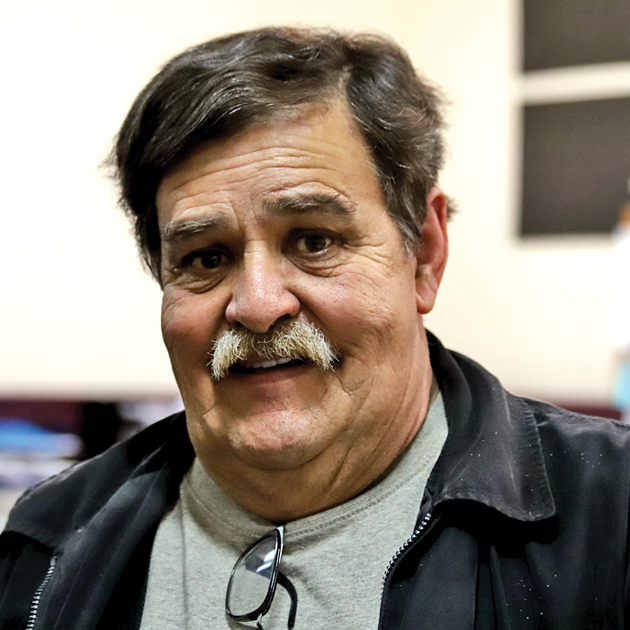 Jackie Claycomb suffered three major health problems in 2018, all of them related to heart disease, but he remains optimistic. “I feel really great,” Claycomb said.

There is a reason heart disease is called the silent killer. Nearly half of all heart attacks—45-percent—are silent myocardial infarctions, which lack the intensity of a classic heart attack such as extreme chest pain and pressure, sudden shortness of breath and dizziness.

Just ask Jackie Claycomb, who was watching TV one night this past June when he had what he calls “a light heart attack.”

“I didn’t even have any pain,” Claycomb recalled.

Unlike the majority of people who suffer heart attacks, Claycomb did not suffer from  hypertension.

Claycomb was diagnosed as having a heart murmur when he was 19. He was in the Army at the time. When he went into the service, he said his drill instructor promised him he’d be in shape before he left basic training.

While Claycomb didn’t have high blood pressure, he did have two of the other key risk factors for a heart attack: he smoked and he had high cholesterol.

“At times it was as high as 762,” Claycomb said. Through diet and medication, Claycomb manages his cholesterol levels, but he still suffered from a deteriorating heart valve. Over the last 20 years, he underwent extensive testing, including catheterization, to monitor the situation. Three years ago, Claycomb suffered an aneurism.

“Instead of pumping blood, it was sloshing blood,” Claycomb said.

Doctors replaced the defective valve with one taken from a pig in April 2018.

“They told me every time I’d pass a barbecue pit, I’d break out crying, but that ain’t happened,” Claycomb joked.

But there was nothing funny about what happened to Claycomb following his open heart surgery. In June, he suffered a heart attack and had to be hospitalized again. Then doctors prescribed a new drug for him which interacted badly with the statins he was taking for his high cholesterol, leading him to suffer debilitating neuropathy in his legs, arms and hands.

“I went to bed feeling fine,” he said. But when he woke up, he could barely walk. Once he fell down so hard that he broke the wires surgeons had used to put his chest back together after his heart operation.

Jackie Claycomb is a proud man. He opened Lee’s Famous Recipe Chicken on College Street in 1972. In what little spare time he had, he restored classic cars and trucks and advocated on behalf of the animals of Mercer County.

But the neuropathy has taken its toll. “I can’t feel nothing,” he said.

It bothers him that he needs to rely on others for the simplest things now, but his condition leaves him no choice. He needs a walker to move around. He constantly drops his keys, pens. He struggles to sign his name.

“I write like a five year old now,” Claycomb said.

The good news is that he seems to be responding well to the physical therapy. He and his doctors are also discussing carpal tunnel surgery to try and return feeling to his fingers.

Claycomb remains optimistic, joking about his situation, but he hopes he can soon put it behind him.

Cardiovascular disease is the leading cause of death in the U.S., claiming more than 840,000 lives per year, according to the American Heart Association, who recently released a report revealing that 121 million adults—nearly half of all Americans—have some form of heart disease. That increase is largely due to changes in blood pressure guidelines.

In 2017, the American Heart Association redefined hypertension—a major risk factor for heart disease—as a blood pressure of 130/80, lowering it from 140/90. That change meant that millions more Americans, age 20 to 60 and older, were now considered to have some form of heart disease.

Here are some tips on how to get your heart disease under control, courtesy of the American Heart Association:

High cholesterol contributes to plaque, which can clog arteries and lead to heart disease and stroke. When you control your cholesterol, you are giving your arteries their best chance to remain clear of blockages.

Most of the food we eat is turned into glucose (or blood sugar) that our bodies use for energy. Over time, high levels of blood sugar can damage your heart, kidneys, eyes and nerves.

Living an active life is one of the most rewarding gifts you can give yourself and those you love. Simply put, daily physical activity increases the length and quality of life.

A healthy diet is one of your best weapons for fighting cardiovascular disease. When you eat a heart-healthy diet, you improve your chances for feeling good and staying healthy—for life.

When you shed extra fat and unnecessary pounds, you reduce the burden on your heart, lungs, blood vessels and skeleton. You give yourself the gift of active living, you lower your blood pressure and you help yourself feel better, too.

Cigarette smokers have a higher risk of developing cardiovascular disease. If you smoke, quitting is the best thing you can do for your health. Smoking cessation classes began Tuesday, Jan. 29, from 5-6:30 p.m. at the Mercer County Health Department.For more information, call Emily Steer at 734-4522 ext 147.

For more information, check out the American Heart Association’s website at www.heart.org.