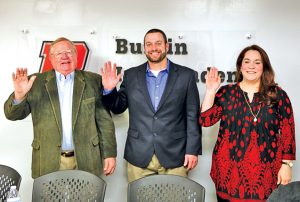 The Burgin Board of Education swore in Bob Clark, Zack Gross and Katrina Sexton at their first meeting of the year. Clark, an incumbent, was reelected chairman of the board of education.

The Mercer County and Burgin boards of education held their first meetings of the year, and they started the budget process.

Mercer County Board of Education

The Mercer County Board of Education held their first meeting of 2019. And they got started on the district budget process, which takes nearly a year, approving a draft budget which includes $21.2 million in revenues and $20.6 million in expenses.

The budget includes a $147,572 increase in budgeted expenses for fiscal year 2019 mainly due to step increases and increased contributions to the County Employees Retirement System. The draft budget has a 2.44-percent contingency, which is better than the two-percent required by state law but is well below the 12-percent contingency the district has traditionally tried to maintain.

“We don’t know much about state or federal funding,” Minor said. “We haven’t set the tax rates.”

She said the district would receive SEEK estimates later this month.

The draft budget is only the first step in the school budgeting process, which takes nearly a year to prepare. The district must send a tentative budget to the Kentucky Department of Education by May 30, 2019, and must approved\ the working budget by Sept. 30, 2019. 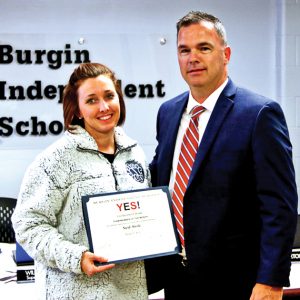 Burgin School Guidance Counselor Sarah Steele was presented with the January YES! Award by Superintendent Will Begley for service “above and beyond” the call of duty.

Burgin Board of Education

The Burgin Board of Education held their first meeting of the year, swearing in new members Katrina Sexton and Zack Gross. Sexton, Gross and Bob Clark, who won reelection, were sworn in. Clark was again elected to serve as chairman while Keith Monson was reelected as vice-chairman.

Their first act of business was approving the $4.1 million draft budget for the next fiscal year.

In other business, the board approved a $300 donation to Project Graduation.

The next meeting of the Burgin Board of Education will be held on Wednesday, Feb. 13, at 7 p.m. at Burgin Independent School (440 East Main Street, Burgin).