Up To $6,000 Being Offered For Information By Local, National Agencies 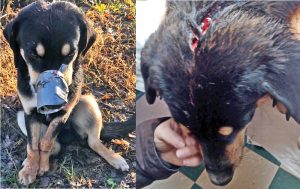 The animal rights organization PETA has joined the Mercer County Sheriff’s Office and Mercer County Crime Stoppers in asking for the public’s help in finding the person or persons who left two badly abused dogs in the Duncan area in December.

A $5,000 reward is now being offered for information leading to the arrest and conviction of the perpetrator of a recent case of animal abuse.

The animal rights organization People for the Ethical Treatment of Animals (PETA) is offering the reward for the person or persons who bound and severely injured two dogs in December.

The dogs were discovered by their owners in the Duncan community close to the intersection of Bohon and Grapevine Roads on Sunday, Dec. 16.

The investigating officer, Dep. Bill Cruce of the Mercer County Sheriff’s Office, said the dogs were treated for their injuries and returned home with their owners.

Despite a $1,000 reward offered by Mercer County Crime Stoppers, he said there has been no real lead in the case.

“We’ve had a few tips, but they haven’t panned out,” Cruce said.

“It takes a dangerous, violent person to tie up and beat two dogs and leave them for dead,” said PETA Vice President Colleen O’Brien in a press release. “PETA is calling on anyone with information to come forward immediately so that whoever restrained and hit these dogs can be held accountable and stopped from hurting anyone else.”

PETA—whose motto reads, in part, that “animals are not ours to abuse in any way”—advises guardians to keep their animal companions safe indoors and not to leave them unattended or allow them to roam free outside, where they may be stolen or injured. Guardians should also be sure to have their animal companions spayed or neutered in order to help control the number of homeless dogs and cats, who are at risk of contracting communicable diseases, being hit by cars, and being abused by cruel humans.

Anyone with information about this case should call Mercer County Crime Stoppers at 812-0016 or the Mercer County Sheriff’s Office at 734-4221.

For more information about PETA, visit their website at PETA.org.