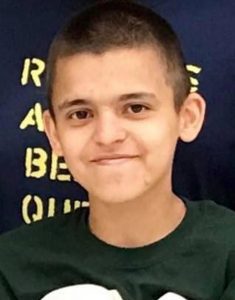 An Anderson County teen who had been missing since Saturday night was found safe but a little hungry Monday night in McAfee.

Alexander Strayer, 16, of Anderson County, was found in the rest room of the Kountry Kupboard Monday evening.

Mercer County Sheriff Ernie Kelty said he was on his way to investigate another report about Strayer when he got the call from Kountry Kupboard. Kelty said a couple living on Highway 1160 reported seeing a young man wearing a hoodie hanging around a neighbor’s garage.

Kelty was en route when employees at Kountry Kupboard called and said the missing teen had just walked in the door.

They recognized him from the media reports.

When Kelty arrived, the teen admitted he was Strayer. The sheriff said he seemed to be in good shape but he was hungry and thirsty. The employees made him a sandwich and gave him something to drink and then Kelty drove him back to Anderson County.

Strayer’s family had been offering a $1,000 reward for information leading to his location.

According to media reports, more than 100 people, four drones and three helicopters were involved in the search. The family had also appealed to the teen via social media to return home.

Strayer was last seen  leaving an Anderson County food pantry early Sunday morning. This is not the first time the teen has wandered off, Strayer’s family said.