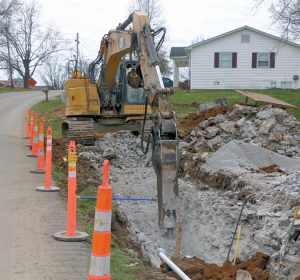 Grant’s Excavating of Richmond work on the sewer line on Curdsville Road in Burgin. Even though it’s been in place since 2017, many property owners have still not hooked onto the system.

Burgin homeowners waiting to be connected to the city’s sewer system will soon be billed for sewer service whether they have been connected or not.

The Mercer County Sanitation District voted last week to notify homeowners who have not connected to the sewer system within 90 days they will be billed for service.

Up until now, the district has not been billing homeowners on waiting lists with the contractor. However,  sanitation district Executive Director Mike Sanford said the agency is at risk of defaulting on their next payment to the federal government unless they start bringing in more money.

Sanford said the district had to borrow against a line of credit to make this year’s payment. He said he had reached an agreement with USDA Rural Development to make the payment in installments. However, that agreement went out the window when the federal government shut down. Sanford said the entire amount, around $126,000, was deducted from the sanitation district’s bank account at the first of the year, which left the district scrambling to pay bills.

Sanford said the government shutdown has also stopped federal assistance to homeowners for connecting to the system.

Larry Catlett, attorney for the sanitation district, said the ordinance is clear: billing begins 90 days after the connection date, whether the homeowner has tapped into the system or not. However, homeowners on a waiting list  to get connected have not been billed up until now.

“You all have been doing them a favor,” Catlett told  board of directors last week. “This gives them an incentive to get it done.”

“This has been going on for two years,” said board member Drew Rice. “If we don’t enforce it, we don’t have much of an ordinance.”

His advice to homeowners who are still not connected?

“Get on as soon as you can so you’re getting something for your money,” Dunn said.

Sanford said he would discuss the issue with new Burgin Mayor Jim Caldwell.

Catlett also asked the board of directors if they wanted to pursue disconnecting water service for property owners who have still not answered district notifications. Sanford said he would go over the list and make sure there was no one on it before pursuing the issue with Mercer County Attorney Ted Dean.

The next meeting of the Mercer County Sanitation District will be Thursday, Feb. 7, at 2 p.m. at the Lake Village Water Association (801 Pleasant Hill Drive).