Over 50 Companies Have Recalled Losartan, Valsartan Since July

The initial recall of Losartan has been expanded, according to the FDA.

A massive recall of some of the world’s leading brands of hypertension medication continues.

Torrent Pharmaceuticals Limited is expanding its  recall of Losartan potassium tablets USP due to the detection of trace amounts of a possible cancer-causing impurity, according to a press release from the Food and Drug Administration. 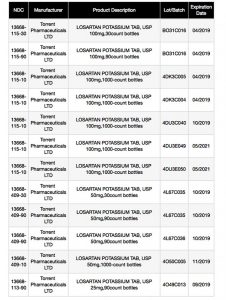 According to the FDA, the product can be identified by checking the product name, manufacturer details and batch or lot number on the bottle containing these products.

Torrent is recalling 10 lots of losartan-containing products which have been found to contain N-nitrosodiethylamine (NDEA) above the acceptable daily intake levels.

According to the FDA, NDEA occurs naturally in certain foods, drinking water, air pollution and industrial processes, and has been classified as a probable human carcinogen.

To date, Torrent has not received any reports of adverse events related to the recall, the FDA said.

The FDA advises patients on Losartan to continue taking their medication, as the risk of harm to the patient’s health may be higher if treatment is stopped immediately. Patients should contact their pharmacist or physician about alternative treatments prior to returning the medication.

The voluntary recall began with two lots of Losartan potassium tablets USP on Jan. 3 before being expanded.

According to the FDA, the recalled medications contain an ingredient made by Hetero Labs in India, one of three overseas factories linked to recalls of drugs commonly prescribed for high blood pressure since July.

The recalls started when the European Medicines Agency removed valsartan products from the market in 22 countries in Europe, plus Canada.

In September, the FDA announced that retesting of  valsartan supplies marketed in the U.S. under the Torrent brand also found NDEA.

Since then, more than 50 companies around the world have recalled the contaminated valsartan products, according to Reuters.

Authorities believe the contamination has been present since 2012, when governments both here and abroad loosened manufacturing standards.

The certificates for  the manufacturers of the contaminated products have since been suspended.

Locally, Losartan and valsartan are two of the biggest selling hypertension medications, say pharmacists, who also say they’ve been inundated with calls since the recalls began.