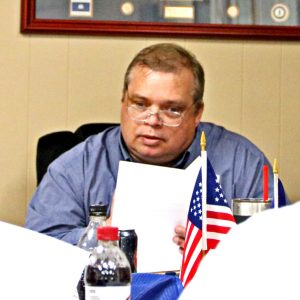 New Burgin Mayor Jim Caldwell looks over a contract with the members of the City Council on Tuesday night.

Update: After press time, Mayor Caldwell announced Billy Whitenack would not be taking the position as chief of the Burgin Police Department due to personal issues.

For once, the friendly little city lived up to its name.

The first meeting of the Burgin City Council of the new year began with a prayer for everyone to keep a civil tongue and ended with an impromptu round of applause.

That doesn’t mean it has necessarily been a smooth transition for Mayor Jim Caldwell. When Caldwell took office, he was essentially doing so with no staff.

As a result, Caldwell and Britney White, who hired on as interim water clerk on Jan. 1, 2019, found themselves locked out of the city’s computer system, the accounting software and bank accounts.

At Tuesday night’s meeting of the Burgin City Council, they voted to resolve some of those issues. They gave permission to Mayor Caldwell, White and Councilwoman Frances Hayslett Cord to sign checks. They approved bidding out for a new water maintenance operator and amended the job description for a new water maintenance supervisor. Cord and Councilman Sindicat “Sid” Dunn also volunteered to serve in a committee with Caldwell to help select the candidates for the still open city clerk position.

Caldwell has also made other moves, firing former Burgin Police Chief Casey Rucker on Dec. 28. “He was let go as an at will employee,” Caldwell said, noting Rucker was not dismissed because of any disciplinary issues.

Caldwell praised the job Whitenack did as chief of the Harrodsburg Police Department and noted that, as a retiree, the city will not have to pay into Whitenack’s pension.

“I couldn’t pass up on him,” the mayor said.

Until Whitenack can take office, the Mercer County Sheriff’s Office will patrol Burgin.

He also has retained Wally Bottoms to serve as interim water maintenance supervisor.

Caldwell praised all of the new hires, especially Britney Smith, who had to teach herself the city’s billing procedures.

Caldwell also praised the help he’s gotten from the city council. Burgin City Council meetings have often been contentious affairs, but Tuesday night’s meeting ended with Councilmen Dunn and David R. Peavler folding up chairs together. On Tuesday night, Caldwell handed out department assignments for the council, however, he made no appointments, leaving up to the members what department they’d like to oversee.

“This is not an official position,” Caldwell said. “I’m asking you all to help the city.”

Once the last few hires have been made, the citizens of Burgin will have almost an entirely new government. Only Lewis Sexton, chief of the Burgin Volunteer Fire Department, remains of the old administration.

But that doesn’t mean there are no hangovers from the old administration. Caldwell asked the council to dismiss the lawsuit filed against him by the city. Caldwell served as Burgin’s chief of police from September 1995 until January 2017, was sued for $25,000 in damages and an injunction to prevent him from swearing in as mayor.

On Dec. 26, Chief Circuit Judge Darren Peckler dismissed the complaints in the lawsuit, but not the suit itself.

Caldwell said he couldn’t dismiss the lawsuit himself, so the council voted to dismiss it. The suit had cost the city over $7,000 so far, he said.

Towards the end of the meeting, the mayor told the crowd that, while it hasn’t been the easiest transition, with the help of the new employees, the city council and the residents of Burgin, they would make it.

“We’re going to do things differently,” Caldwell said. “I think you’re going to see some changes.”