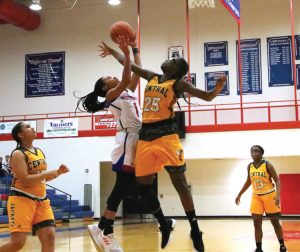 The Lady Titans (6-3) kicked off the Tim Short Auto Max Christmas Clash Thursday night with a dominating win over the Madison Southern Eagles (6-6).

The Lady Titans won the game early, opening up a 16 point lead, making it 23-7 Titans at the end of the first quarter. Senior Toni McComb led the charge with seven points, four assists and two steals after just eight minutes of play.

The Titans took a 13 point lead into halftime and never lost it; pulling away to a 30 point lead, and a final score of 69-39.

The Titans were without junior guard Channing Lewis, so Coach Haley Spivey was very pleased to get a 30 point victory despite missing their leading scorer.

“I kind of challenged them before the game and said ‘we’re going have to have some people step up, it doesn’t just have to be one person,’” said Spivey. “Channing, she’s a leader, she brings more than just her stats and it will be a challenge for us through January, but I think it will only make us better in the end. If we have some people that can step up now then when Channing gets back it will only make our team better”

Lewis is expected to be in a cast for four more weeks before she is cleared to play. 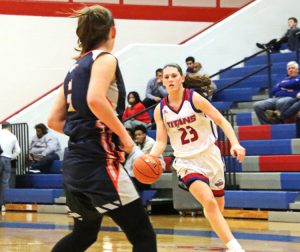 “All three of them are just so athletic. It’s really hard to guard them and I’m kind of glad I don’t have to coach against them. When they bring that intensity it is very encouraging, but I’d like to have four or five who are bringing us the points and that’s what we’re working on. It is very encouraging, I told them it wasn’t that pretty but a win is a win and we’ll have to try and build off of it,” said Spivey.

“She kind of gives us that height that we don’t really have. She’s just been really aggressive lately, in practice and games, she can get to the rim and she can hit the three, she’s just a really dynamic player, ” said Spivey.

The Louisville Central Yellow Jackets (7-4) came out on top Friday night after an overtime thriller against the Mercer County Titans (6-4) in the second round of the Tim Short Auto Max Christmas Clash.

It was a very close contest throughout all four quarters and both defenses proved stubborn. At the end of the first quarter, each team had only scored eight points and Timberlynn Yeast scored all eight for the Titans.

During the second quarter, the Yellow Jackets began to pull away, opening up a seven point lead and scoring 18 points to make it 26-19 at the half.

In the third quarter, Toni McCombs took over. Her 11 points, two rebounds and three assists led the Titans comeback and lowered the Central lead to two points heading into the fourth quarter.

Coach Spivey had great things to say about her senior guard and what role she wants her to play.

“I want her to be a little more dominant and aggressive and even a little selfish. She needs to want to score, but she does need to be the facilitator and leader on the floor. Though for her it’s her senior year and I want her to have the mind-set, ‘ if I have to take over a game I will, ’” said Spivey.

The Titans proved resilient by battling back in the second half, and Spivey knows how important early season battles like can be.

“It’s a good experience and it will benefit us in the long run to have them put in those situations, but we have got to win some of them too. It’s a learning experience I’ve got a young group out there. Especially with Channing (Lewis) hurt right now, that’s what we talked about, making up for Channing’s leadership and control over the entire game. Not including her stats, she’s bringing 18 to 20 points a game and 10 to 12 rebounds a game, but the biggest way we’re missing her is her leadership and control over the game, and I’ve just got to have some people that want to step up and do that,” said Spivey.

“I just felt like we weren’t responding to the adversity well. I really wanted to have some people step up, and in some ways we did, but I need someone to want to just take over. I thought Toni and Timberlynn did that especially on defense in the second half but it can’t just be those two, ” said Spivey.