“James Harrod: The Battle For Kentucky” Returns For Two Weeks In July 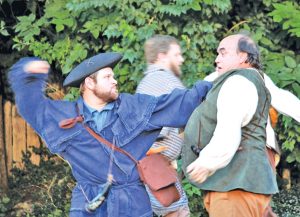 Capt. James Harrod (here played by Than Cutler, left, in 2017) comes out swinging when “James Harrod: The Battle For Kentucky” returns to Old Fort Harrod State Park in July.

One thing Mercer Countians can look forward to in 2019: the return of outdoor drama at Old Fort Harrod State Park.

“James Harrod: The Battle For Kentucky” is returning for two weeks this July.

Outdoor drama at Old Fort Harrod is a local tradition dating back decades, but it has been missing since 2017, when the state shut down the James Harrod Conference Center—a.k.a. the Black Box—which was used to store costumes because of mold.

After the state condemned parts of the backstage area,  Ragged Edge Community Theatre and Old Fort Harrod suspended production of “James Harrod” and the amphitheater has sat unused except for movie nights.

Coleman said the condemned areas in the amphitheater have been repaired. However, the cast will use tents this year as dressing rooms, Coleman said.

Ragged Edge Community Theatre will not be involved. Coleman said the fort will be presenting the play with an all volunteer cast.

“I hope to have a whole lot of our experienced cast back,” said Coleman, who said he’s also looking forward to working with new cast members as well.

He said they are cutting back to two weeks this year.

“It’s a whole lot to ask of the actors,” Coleman said. “It pretty much takes up their whole summer.”

Old Fort Harrod is closing for the holidays, but will reopen on Jan. 2. Winter hours for the park are 9 a.m. to 4:30 p.m. Monday through Friday. Regular hours will resume in March, Coleman said.

The park’s first big event is coming up. The Spies Of Fort Harrod will recreate George Rogers Clark’s Gunpowder Run on Saturday, Jan. 5, 2019. But the play’s the thing. “James Harrod: The Battle For Kentucky” runs for two weeks, from July 18 to July 27.