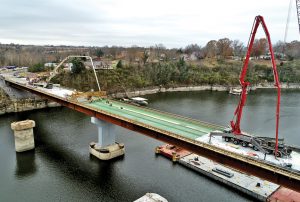 Construction crews pour the final concrete on the new Kennedy Mill Bridge, which opened for traffic on Dec. 21, nearly a year ahead of schedule.

Motorists and business owners along Herrington Lake got an early Christmas present this year when the replacement for the Kennedy Mill Bridge was opened to traffic on Dec. 21.

Walsh was hired by the state to build the new bridge. The original completion date was Nov. 29, 2019, but the contractor and the Kentucky Transportation Cabinet came to an agreement in October to accelerate construction. They were able to overcome several setbacks—including torrential downpours in June which forced the contractor to stop work on the Mercer County side—and finish the project ahead of schedule.

The long saga of the Kennedy Mill Bridge—which was built in 1924 and closed for repairs in 1940, 1944, 1991, 2003, 2009 and, most recently, for seven months from September 2015 until April 2016—finally came to an end when the state closed it for good in April of this year. And now, with the opening of the new bridge, locals and tourists have something to look forward to this summer.

From pension reform to the murder trial of Trenton Easterling to the Lady Titans winning back-to-back state basketball championships to the mayoral races in Burgin and Harrodsburg, find out the rest of the top stories for 2018 in this week’s issue of the Harrodsburg Herald.