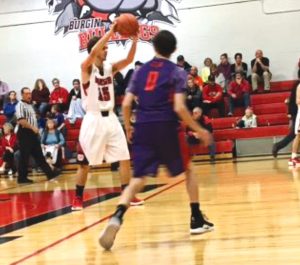 Here is a recap.

Senior Cameron Hurst was the top scorer for Burgin with 16 points. Junior Wesley Tyler had 11 points and a team-high 13 rebounds.

“Our defense limited their two best players in this game,” said Head Coach Don Irvine. “Our ability to shut this team down in the second half is a testimony to hour gritty our defense was after trailing at the half.”

The Bulldogs only allowed 11 points in the second half.

“We’re 9-1 on the season, so we have to be pleased, but we’re not satisfied,” said Irvine. “We know we are not as good as we need to be and will strive to improve even more after Christmas break.”

Senior Matthew Kirkpatrick was the last Bulldogs in double figures with 11 points. Eighth grader Hunter Reed and senior Ethan Kestler were tied for the team lead in assists with three each.

Hurst dominated this game, scoring a game-high 21 points and 16 rebounds. He also had a team-high five assists.

Tyler flirted with a double-double with 12 points and eight rebounds.

“It was a good solid team win for us after a three hour bus ride and long wait time for the first game to end,” said Irvine. “I thought our ball movement had improved from the first time we played this team.”

“We executed well enough to get the win. Thirty-five rebounds as a team, led by Cameron (Hurst) and Wesley (Tyler) were big for us,” said Irvine.

Sophomore Jackson Qualls had one of his best games of the young season. The underclassman scored eight points, to go along with two rebounds and three steals.

The Bulldogs wont be back on the court until the new year when they host Rose Hill Christian on Saturday, Jan. 5, at 2 p.m.