The Huston House on Beaumont Avenue decorated for the holiday season with a nativity scene, lights and much more. (Photo by Jennifer Marsh)

For Bill Huston, Christmas is a big deal. His house on Beaumont Avenue has lights, a nativity scene, several snowmen and much more.  The beauty of the outside of the house, fails in comparison to the delicate decorations found inside the home. “We have Christmas everywhere,” said Huston while standing near his vintage Santa statues.  “Most of our decorations are old and come from the 40’s and 50’s.”

Christmas was always important to Huston’s family. It is a tradition he seems to enjoy carrying on for his five children and eight grandchildren.

“My family came from Canada and everyone there decorates for Christmas,” said Huston. “We always have our village around the Christmas tree up for Thanksgiving. The grandchildren love it.”

The Huston family tradition is to light up the yard after dinner is threw on Thanksgiving.

His Santa village features the Polar Express Train along side a multitude of shops, ice skating rinks and even a house with a garage sale.

“I would say the set up on the village takes around 40 hours of work. The outside takes 50-60 hours if I am doing it alone,” said Huston.  “The village is the unique and we add to it every year so there is always something new to see.”

Huston has a love of Christmas and enjoys decorating but that isn’t his only hobby. Trains in general inspire Huston to collect and he has a large collection of just about everything train.

“The village stays up until around mid-January but the large train display stays up year around,” said Huston as he opened his garage to reveal antique train memorabilia. “I restore things. I collect different things for the railroad.”

Huston serves as Chairman of the Board on the Kentucky Railroad Museum and his collection of memorabilia proves it is a labor of love.

Huston’s large train room is filled with model trains. He has several tracks but can run five tracks at once without switching.

“I was given my first train in 1952 and have been collecting ever since,” said Huston. The best part about collecting something is sharing it with others.”

Huston’s long time friend and engineer Willard Hamm agreed with his sentiment of sharing. Hamm and Huston have been meeting every Sunday night since 2008 to repair and do maintenance on the large model display.

Every one of Huston’s trains are vintage. He said most of his trains and accessories are from the 50’s and 60’s but he has trains from years 1901-1980.

Trains aren’t the only working part of his hobby. Hamm pointed out that all the accessories to the tracks work as well. Huston has a collection of working motorized train accessories such as a coal loader, a log loader and dozens of lights.  The switchboards operate all the trains and accessories without the need of assistance.

“We have over 500 pieces of rolling stock and all our boards are interconnected,” said Huston.  “Willard has the repair manuals for Lionel Trains, that is something you can’t buy anymore.”

Along with his trains Huston has over 100 hardback books about the railroad, dozens of keys, real switch lights and several vintage signs.  Huston was part of the Historic Homes Tour several years ago but has added to his collections extensively since then.

“I have loved trains my entire life,” said Huston. “I am hoping to pass the love down to my grandchildren. 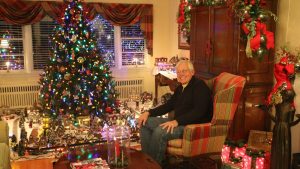 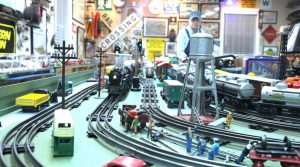 The black steam engine given to Bill Huston in 1952, barreling down the tracks with Willard Hamm as engineer. The steam engine was the first train Huston ever collected. 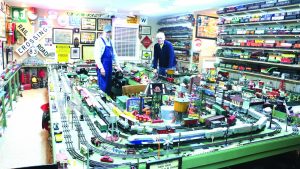