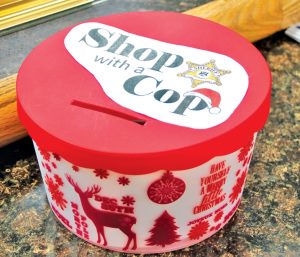 There is still time to make donations to the Shop With A Cop program, also known as Shop With A Hero. Donations can be made at the Mercer County Sheriff’s Office.

The Harrodsburg Police Department wants the public to know that a couple asking for donations for Shop With A Cop are on the up and up.

HPD Chief Dispatcher Gail Napier said Douglas Garrison and his wife Gloria have already raised $400 for Shop With A Cop, also known as Shop With A Hero. The initiative gives kids a chance to go shopping with first responders belonging to local law enforcement and rescue services.

The Garrisons have also raised the suspicion of some local residents, who worried if the couple were scammers. It’s not uncommon for ne’er-do-wells to take advantage of people’s holiday-fueled generosity by soliciting donations while pretending to represent local police and fire departments.

However, Napier said the Garrisons, while not sanctioned by the police department, are the real deal.

“He is sincere, he is legitimate,” Napier said of Doug Garrison. “He decided he wanted to pay it forward.”

“This is our first year,” said Gloria Garrison.

She said she and her husband asked their son, Gavin, what he wanted for Christmas.

“He wanted to give some toys away,” Garrison said. “We thought about the Harrodsburg Police Department.”

Garrison said she regrets the misunderstanding, but said she and her husband were only trying to help.

“We hate that people thought we were scammers,” she said. “We wanted to help kids who couldn’t afford Christmas.”

Shop With A Hero is being organized by Capt. Scott Elder, chief deputy of the Mercer County Sheriff’s Office.

Donations can be made directly at MCSO headquarters (207 West Lexington Street). For more information, call the sheriff’s office at 734-4411.

HPD Ordinance Enforcement Officer Erich Ruehs admits it can be confusing trying to separate the legitimate charities from the fake ones.

“I do this for a living, and I have to double and triple check,” Ruehs said.

The HPD is also in the process of assembling their calendar, which will be released next year. The printer, Royce Publications of Lexington, is selling ads, but some people are reluctant to commit because of their fear of getting scammed, he said.

“We’ve had people calling up for the calendar and it was a scam,” Ruehs said. “We’ve had a real bad history here in Harrodsburg.”

He said the best way for people who wanted to advertise in the calendar is to drop off their contributions at HPD headquarters (411 North Greenville Street), and Ruehs will take them to Lexington himself.