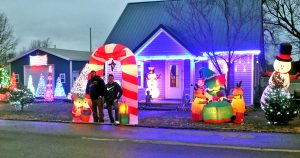 Colby Harper and Cameron Nagel in front of their house on Russell Street in Burgin decorated for the holiday season.

Holiday spirit is found all over Mercer County with the festive lights, decorations and the season’s jolly atmosphere. Some households make decorating a family tradition.

The Harper House in Burgin is one of those households, with their extensive and bright light display that dances with music. Colby and Crystal Harper started decorating their house in 2003.

“We started with a mechanical reindeer that turned its head,” said Colby Harper. “It has since been repurposed though.”

Harper made all of his displays except for the blow-ups. He said he started making his own because he wanted LED lights but couldn’t find the type he wanted.

“The first one I made was a 22 foot Christmas tree made out of a pole with lights coming down,” said Harper. “Since then I have changed it and now have eight triangle trees.”

The Harpers add something to their display every year. This year’s addition was the snowman on the porch. Harper was humbled by the attention his work was getting and when asked why he continues to decorate he said, “Why not?”

“My son in law is doing it on his house now and this year my son Cameron helped set everything up,” said Harper. “It is a family event that starts with me tinkering in the garage.”

Harper uses repurposed supplies for all of his work. “The lollipops came from my mother-in law,” said Harper. “They were planter balls that were left over from a construction project she had done.”

Harper said the balls sat in his garage for over a year before he decided to turn them into lollipops.

The Harper’s plan to continue to add to their display yearly and hope to pass on the decorating tradition to their son.

Check out the Harper house on Russell Street in Burgin to see a light show filled with tradition.