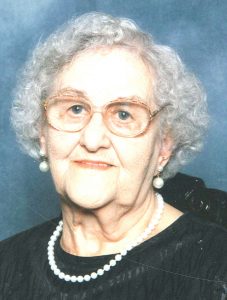 Born Dec. 4, 1922, in Mercer County, she was the daughter of the late Fred and Evie Darland Durr.

She was a homemaker and a member of the Cornishville Christian Church, where she attended for 78 years. She enjoyed writing for the Mercer Magazine in the Harrodsburg Herald and solving word puzzles. Her greatest accomplishments by far were being a Christian and being a dedicated wife, mother and grandmother. She was also a Kentucky Colonel.

She was preceded in death by two brothers, Willard Durr and Carnell Durr, and one grandson, Brent Peavler.

Funeral services were held at 2 p.m. on Wednesday, Dec. 12, at the Alexander and Royalty Funeral Home with Bro. Scott Young and Greg Virgin officiating. Burial was in the Cornishville Christian Church Cemetery.

Expressions of sympathy may be sent to the family at  www.alexanderandroyalty.com.