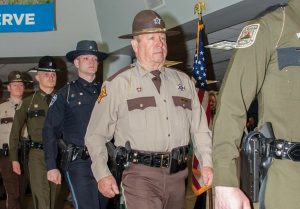 Dep. Bill Cruce graduated from basic training in April and went to work full time with the Mercer County Sheriff’s Office. Cruce credits all the hard work he did training with helping him survive a heart attack in October.

Dep. Bill Cruce of the Mercer County Sheriff’s Office is returning to full duty on Thursday.

Cruce, a retired teacher who graduated from the police academy earlier this year, suffered a heart attack during a live shooting drill at Burgin Independent School on Oct. 20. A heart attack has been known to end careers, especially second careers. But Bill Cruce is not your average retired teacher.

The Harrodsburg Herald spoke with Cruce recently. He was waiting to get the all clear from the doctor and the waiting was getting on his nerves. He wasn’t just anxious to get back to work, he was anxious to start working out again.

Once his doctor cleared him to start exercising again, he said he’d be okay.

“After that first mile, I’ll be all right,” Cruce said. “When he says I can start running, I’ll know I’m where I’m supposed to be.”

Cruce grew up in Burgin and became a teacher. He taught industrial technology in Jessamine County and later in Mercer County schools. He retired in August 2013 after nearly 30 years. The week after he retired, he reported for work at his second career as a reserve deputy with the Mercer County Sheriff’s Office.

Teachers do a lot of things after they retire. Some work at school in other capacities, some go into real estate, some become consultants and some even go into politics. Not many become police officers.

“I always had a high respect for people in law enforcement,” Cruce said. “It’s always been in the back of my mind.”

He spent four years as a reserve deputy, and somewhere in there he started CrossFit to get in better shape.

“I lost a lot of weight and got to where I could run,” he said.

Determined to become a full-time law enforcement officer, Cruce entered the Department of Criminal Justice Training’s Law Enforcement Basic Training Academy, where he was the oldest recruit in the academy’s history. Old enough to be the father of many of his fellow cadets, Cruce ran a mile and a half and worked out three hours every day in full gear. He graduated in April of this year. And then he came back to Mercer County and went to work.

Cruce said he doesn’t remember what happened that day at Burgin Independent.

“I remember being at the bottom of the stairs and going to my knees and waking up in ICU in Danville,” he said. As soon as his doctor walked into the room, Cruce asked him: “When can I go back to work?”

The doctors told him one of the vessels in his heart was over 100-percent clogged, but he’d never experienced any symptoms of heart disease.

“I hadn’t felt anything,” Cruce said. “I feel no different today than I did one month ago.”

It amazes Cruce how he could train so hard—at CrossFit, at the police academy—and never have a problem.

“How could I go through the academy exercising every day and never have an issue?” he mused.

On the other hand, working out is probably what helped Cruce survive the heart attack.

“The doctor said I was in such good shape it probably saved my life,” he said.

The doctors are treating him with medication. In addition, Cruce—who neither smokes nor drinks—has given up meat, dairy and bread. Once doctors cleared him to start exercising again, he knew he was okay.

Cruce said he loves serving Mercer County as a deputy and can’t wait until he gets back on duty.

“I fell in love with it and I’ve never regretted it,” he said.