Long And Greenburg Proud To Leave City A Better Place 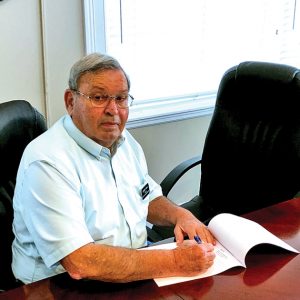 Outgoing mayor Eddie Long, seen here signing the agreement to purchase the former Caldwell Tank building, said he’s proud of the significant improvements to the city’s infrastructure made during his tenure. “We’re ready to start turning on,” he said.

Mayor Eddie Long said he will not appeal last week’s recount, which handed the victory to his opponent, Art Freeman.

“It’ll be a little less money and a lot less grief,” Long said. “I’m not willing to fight for it.”

Long said he will concentrate on finishing out his second term as mayor of Harrodsburg. He also served the city for 17 years as a commissioner.

He said he’s proud of the shape Harrodsburg is in after his time as mayor, in terms of finances and infrastructure, such as the newly improved city sewer, the increased funding for black topping roads and the new police headquarters and fire department substation. He said those projects put Harrodsburg in a good place to start recruiting new businesses.

The election caught him by surprise. He and the city commission were running unopposed for reelection. In the May primary, only 13-percent of eligible voters in Mercer County cast their ballots, the lowest turn out in Kentucky according to the Secretary of State’s office.

Long said he went on vacation and came back to find he was running behind in a heated reelection campaign.

“I just wish there had been more time so I could have refuted some of the rumors,” he said. “We issued 26 more business licenses than we did the year before. But everybody was talking about businesses leaving.”

Long said he hopes for the best for his successor and the city.

Long said he has no definite plans on what he will do once he leaves office.

“I’m just going to take it easy,” he said. “My biggest headache is how do I get my cell phone changed over?”

Even though the state board of elections has not officially certified the result of the recount, Freeman is currently serving on a committee to hire an economic development director for the city. He will not become mayor until he’s sworn into office in January. 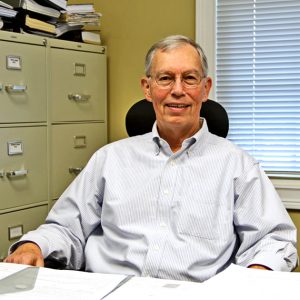 Doug Greenburg has retired as Harrodsburg city attorney after nearly seven years at the job. Despite the tension of trying to get conflicting interests to find common ground, Greenburg said he’s enjoyed his time with the city. “It’s been a pleasure,” he said.

One of his first duties will be to find a new city attorney. Doug Greenburg is retiring after nearly seven years a the position. Greenburg’s final board meeting was last week. Asked why he was retiring, Greenburg had a simple answer.

Greenburg, who served as Mercer County attorney for 29 years before becoming city attorney, said he hopes to travel with his wife, Adele. Outside of his years attaining his degrees at Eastern Kentucky University and the University of Kentucky College of Law, he has spent his entire life here in Harrodsburg.

“We’re in relatively good health,” he said. “We want to try and take advantage of a good situation.”

There have been a lot of changes during his years as an attorney, especially the growth of internet filing.

“So many things are becoming electronic today,” he said.

Greenburg said he’ll miss being involved in the day-to-day operations of the city and his interactions with city employees as well as elected officials.

“They’ve all been super to me,” he said. “We’ve had a good working relationship.”

Greenburg said he’s proud that the city currently only has one outstanding lawsuit against it, which wasn’t the case when he became city attorney. The case predates his time as city attorney.

His parting advice for his successor is to seek advice from other city attorneys as well as the Kentucky League of Cities.

They can also call Greenburg, who will still be practicing law in Harrodsburg when he’s not traveling.

“Any time they have a question, I’ll be glad to help,” he said.