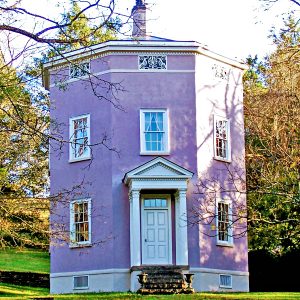 The Tower of the Winds at Warwick was designed by Clay Lancaster, a renowned architectural historian.

Tucked into the hills of Mercer County sits Warwick, which was built by Moses Jones circa 1810. Jones, who was taken captive as a child by Chickasaw Indians after his family was killed near Nashville, came to Mercer County at the age of 16 and married Mary Henderson. He named their home after a nearby Kentucky River port which had been established as a town by an act of the Virginia legislature in 1787.

Warwick built on a slope with a rear entrance at ground level. The home features carved woodwork attributed to Jones as well as rooms later added by Clay Lancaster, a renowned architectural historian. Lancaster designed the unique octagonal Tower of the Winds as well as the Tea Pavilion, which is reminiscent of a small 18th Century banqueting hall. 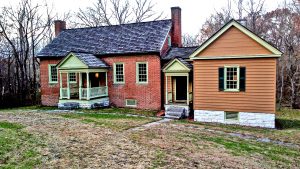 Moses Jones House at Moses Jones built Warwick circa 1810. Much of the interior woodwork was crafted by Jones.

Warwick is one of the stops on the 27th annual Holiday Homes Tour, which is being held by the Harrodsburg Historical Society on Saturday, Dec. 1, with new times from 11 a.m. to 5 p.m. This home cannot be found by GPS, therefore, members of the Historical Society will give detailed directions to tour participants.

The house is known for woodwork and architecture, but it isn’t the only gem hidden in the hills of Mercer County.

Enter Vickie’s Mayo Country Store, owned by Vickie Curtsinger located at 2056 Talmage Mayo Road, through the old double-leaf front doors,and remember a time when the pace of life was a little slower and the general store was the hub of every community.

Although the store has been refurbished, the owners have retained the 1900s bead board walls and ceilings, original flooring and shelving as well as the original counters, display cases and long display table.

The Holiday Homes Tour will start at the Harrodsburg Historical Society that is housed in the historic Morgan Row. Morgan Row was the social and business center of Harrodsburg during the first half of the 19th century. The woodwork is attributed to Mathew Lowery, a renowned craftsmen of Mercer County in the early 1800s.

Join the Holiday Homes Tour on Saturday, Dec. 1, from 11 a.m. to 5 p.m. and learn more about the history of Mercer County.

Participants in the Homes Tour will get 1$ off their ticket to see the Ragged Edge Community Theatre’s production of a Christmas Carol, playing Dec. 7-9 at 7 p.m.