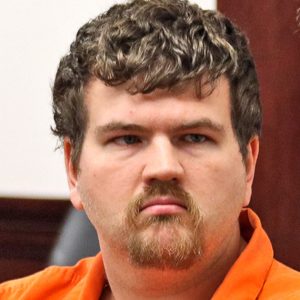 A Harrodsburg man has been indicted for the attempted murder of a police officer.

John Michael Peach, 32, of 330 Bacon Court, has been charged with criminal attempt to commit murder of a police officer, a class B felony, on Sunday, Oct. 28. Peach is also charged with two class D felony counts of 1st-degree wanton endangerment, for flourishing a loaded firearm in the presence of a minor child and his wife, Renee Peach.

In a preliminary hearing held two weeks ago, Peach’s attorney, Michael Hawkins, asked the court to dismiss the attempted murder charges. However, Circuit Court Judge Jeff Dotson denied the motion, as well as requests to lower Peach’s bail and to allow him to see his wife.

Cpl. Derek Patterson of the Harrodsburg Police Department responded to an assault complaint at Peach’s home in the early morning hours of Sunday, Oct. 28. Patterson was confronted by Peach, who was in a “shooter’s stance” with his loaded handgun pointed directly at the police officer. Patterson discharged his weapon three times, striking Peach once in his left hip.

The wounded man was taken to Ephraim McDowell Regional Medical Center where he was treated and released.

Peach’s bond was set at $30,000 on the condition he have no contact with the victims. He will return to court for assault charges related to the incident on Thursday, Nov. 29.

Tony Dingess, an investigator with the Kentucky State Police, testified.

The Mercer County Grand Jury handed down indictments last Wednesday on charges including escape, bail jumping and unlawful access to a computer.

Denae Cobb, 28, of 563 Fairway Drive, was charged with 1st-degree unlawful access to a computer, a class C felony. According to the indictment, Cobb accessed a computer without the knowledge of the owner for the purpose of obtaining money or property through false or fraudulent representation between Sept. 27, 2017 and July 2, 2018. Bail was set at $10,000. Dep. Wes Gaddis (Mercer County Sheriff’s Office) testified.

Deborah Jennings, 51, of 1117 Collins Lane, Frankfort, is charged with 1st-degree bail jumping for failing to appear for an arraignment on Nov. 13.

Jennings was indicted last month for operating a motor vehicle under the influence, fourth or subsequent offense, a class D felony. The offense occurred on Sept. 9.