Recanvass Does Not Change Election Results 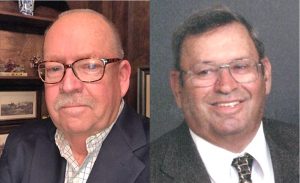 Freeman, who ran a write-in campaign to unseat Mayor Eddie Long, is suing the Mercer County Board of Elections. He is asking the judge to set a minimum bond for the cost of the recount, to transfer voting machines, ballots, boxes and all papers to the circuit court and schedule a recount to examine the actual paper ballots.

On Friday, Virgil Monroe and Donna Holiday of the Mercer County Board of Elections, County Clerk Chris Horn, Capt. Scott Elder of the Mercer County Sheriff’s Office, Harrodsburg Mayor Eddie Long, Art Freeman and his attorney, Michael Hardin, showed up for a recanvass of the mayoral race.

They retallied the recapitulation sheets and confirmed that the vote tally from the Nov. 6 general election, in which Long defeated Freeman by four votes—1033 to 1029.

However, Freeman and Hardin were more concerned with 63 write-in votes that were not certified by the election board that night. The ballots were either left blank or a name was entered that did not match one of the seven alternatives Freeman had included when he filed to run for office.

Under questioning by Hardin, Horn said the election board members and his staff had used only digital images of the write-in votes, not the original votes.

“We had to look at that and make a determination,” said Horn, who said he consulted with the manufacturer of the voting machines and learned they could not enhance the digital scans in any way, nor could they print out the ballots.

“The only thing we can look at is what’s on that screen,” he said.”We spent hours looking at it.”

Horn and the other members of the board of elections said there were a variety of names written down on ballots that Tuesday. But they could only find 1,029 of them that matched the names submitted by Freeman.

The candidate said he has no hard feelings towards Long, who had no comment on the recanvass or recount, but he said he owed it to his voters to press on with his case.

“I feel like I have an obligation to find out if they are certifiable or not certifiable,” Freeman said.

The paper ballots are locked up and sealed in the voting machines for 30 days after the election. But Freeman’s lawyer thinks a close examination of the ballots may change the outcome of the race.

“It would be instructive to look at the ballots,” Hardin said.

The hearing is scheduled for 9 a.m. on Monday, Nov. 26, at the Mercer County Judicial Center.

The Harrodsburg mayoral race is hardly the only election in Kentucky with a close margin. In the state House race in Owensboro, Democrat Jim Glenn defeated Republican Rep. D.J. Johnson by one vote.

In Buckhorn, a coin flip allowed alcohol to be sold at a state park after an election there ended in a tie. According to the website Politico, there have been at least three elections in Kentucky this year that have been decided by coin flips.