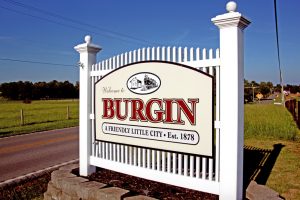 After 46 years of service to the city, Mayor George Hensley said he is cutting ties with Burgin. His son Shane Hensley’s resignation goes into effect on Dec. 28.

For the first time in nearly five decades, the City of Burgin will have to do without the efforts Mayor George Hensley, who lost his bid for reelection against former Police Chief Jim Caldwell.

His son, Shane Hensley, also tendered his resignation.   Shane Hensley said in a letter to the council that he “will no longer work for the City of Burgin in any way, shape or form” effective Dec. 28.

That leaves the city government with a little over a month to try and fill all the jobs the Hensleys have performed for the city over the years, from repairing and replacing water lines to reading meters, locking and unlocking the city cemetery, dumping the recycling trailer and even hauling road salt from the county garage.

The council moved to advertise for someone with a water maintenance license to handle most of those duties. They would also like to meet with a representative from Turf Pros, who plow city streets, to see about hauling salt.

George Hensley’s single term as mayor has been one of the contentious eras in Burgin’s history. The state government is withholding $112,000 in state road aid because of missing audits dating back to 2011, the city government has been written up several times for violating open records laws and the mayor was attacked on Main Street back in April. Legal proceedings against the mayor’s alleged attacker, James H. Hurley, are still ongoing.

But Hensley’s term has also been one of momentous change for the friendly little city. While Hensley was mayor, Burgin gained its first municipal sewer system.

However, the blasting done by contractors while installing the system has been blamed by many citizens for causing this year’s catastrophic flooding, which has damaged many homes in the area near Water Street.

“I got blamed for causing the flood,” Hensley said last week. “Me and God.”

Hensley told the city council he had received a copy of the long awaited report from the Kentucky Department of Water about the sinkhole on Water Street.

“There was no mention of dynamiting anywhere,” Hensley said.

He said he’d also spoken with representatives from the Bluegrass Area Development District about collecting damage reports from Burgin residents affected by the flooding.

Hensley said it would take him up to a month and a half to clean out his desk and make room for the new administration.

In other business, the City of Burgin will hold their Christmas parade on Saturday, Dec. 1, at 5 p.m. Prizes will be awarded to the best floats, to register, contact Carol Bump via Facebook or on the phone at 612-9722 or 612-8565.

Councilman Sindicat “Sid” Dunn is also asking local churches to participate in Christmas caroling at the White House on Main Street on Dec. 1.