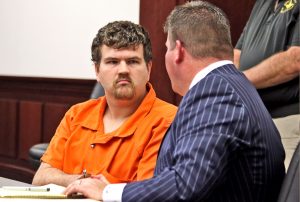 A judge has ruled the legal proceedings against John Michael Peach may continue.

Peach, 32, of Harrodsburg, has been charged with attempted murder of a police officer after a shooting on Sunday, Oct. 28.

In a preliminary hearing held last week, Peach’s attorney, Michael Hawkins, asked the court to dismiss the attempted murder charge. However, Circuit Court Judge Jeff Dotson denied the motion, as well as requests to lower Peach’s bail and to allow him to see his wife, Renee Peach.

The facts of the case are not in question.

According to testimony from Tony Dingess, an investigator with the Kentucky State Police, the Harrodsburg Police Department responded to an assault complaint at 330 Bacon Court at 3:05 a.m. on Sunday, Oct. 28.

Dingess said Peach and his wife could be heard screaming at each other over the 911 call.

Patterson was confronted by Peach, who was in a “shooter’s stance” with his handgun pointed directly at Patterson.

Patterson discharged his weapon three times, striking Peach once in his left hip. Peach did not return fire, Dingess testified. He ran to his bedroom, dropped his gun, and returned with his hands up. From that point on, Peach complied with all commands, Dingess said, and admitted to being armed and having the handgun raised.

“He was very apologetic,” said Dingess, who was called into the investigation because it is an officer-involved shooting.

Hawkins did not dispute Dingess’ testimony. He admitted both Peach and his wife were intoxicated at the time of the shooting. He argued Patterson never identified himself to Peach. 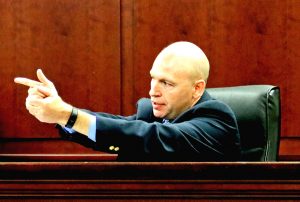 Tony Dingess, an investigator with the Kentucky State Police, testified that when John Michael Peach confronted police on Oct. 28, Peach was in a “shooter’s stance.”

“Never once did he identify himself as a law enforcement officer, did he?” Hawkins asked.

Dingess said Patterson was interrupted every time he tried to identify himself. He also testified that, at the time of the shooting, Patterson did not have his flashlight shining in Peach’s face, obscuring his vision.

Hawkins said Peach never fired his weapon nor did he ever make a threat towards Patterson. Dingess, who decided to charge Peach with attempted murder after reviewing the evidence, disagreed. He noted Peach was in a shooting stance and his weapon was loaded when he was shot.

“I consider that a threat, when someone points a handgun at me,” the state trooper said.

Judge Dotson denied Hawkin’s motion, and the case will proceed to the Mercer Grand Jury either this month or in December.

Even though Hawkins noted that Peach has no criminal record, Dotson also denied Hawkins’ request to lower Peach’s bond or to release Peach into the custody of his father. He also denied a request made by Peach’s wife to allow her to visit him.

Peach received treatment at Ephraim McDowell Regional Medical Center and is being held at Boyle County Detention Center on bonds worth $202,000. He is schedule to return to court on Thursday, Nov. 29.