Things Are Picking Up After A Bleak Summer 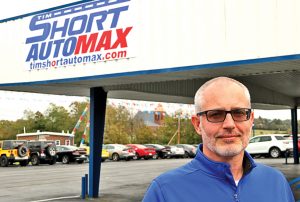 Bryon Dean is the general sales manager at Tim Short AutoMax, who have opened at the former location of Spirit Chevrolet. The company owns over 30 dealerships in four states, but this is their first west of I75 in Kentucky. “We’re excited to be here,” Dean said. “We’re excited to be in Harrodsburg.”

While a debate has been raging over the last few months about whether Harrodsburg and Mercer County are business friendly, a group of local and out of town entrepreneurs have been busy opening up new businesses. In the past few weeks, Harrodsburg has gained a new clinic, Harrodsburg Urgent Care (located next to Kroger), a new clothing boutique, LouElla’s on Main, and a new bank, Commonwealth Credit Union (at the location of the former Christian bookstore near Walmart).

But what a difference a few months make. Tim Short AutoMax will officially open at the former Spirit Chevrolet location on Thursday, Nov. 1 (but will hold their grand opening ceremony on Nov. 5). A new locally owned restaurant, the Skillet on Main, is opening at the former location of Blue Moon on Main Street on Monday, Nov. 19. And CC Auto Parts and Service hope to open their brand new expanded facility before Thanksgiving.

Bryon Dean is the general sales manager at Tim Short AutoMax. The company owns over 30 dealerships located in four different states but the one in Harrodsburg is their first one west of Interstate 75, Dean said.

“We’re expanding our territory,” Dean said. “I think this market will do well.”

A Somerset native, Dean said he’s heard the complaints about trying to start a business here. He said he was told Mercer County was where restaurants go to die.

“We’re not a restaurant, but we’re damn sure not going to die here,” Dean said.

The dealership hopes to keep up to 200 vehicles ranging from $8,000 to $70,000 on the lot. Since taking over, they’ve completely renovated the showroom and offices. 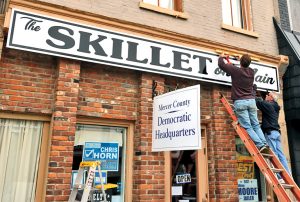 Jack Pearson of Signs By Lil Jack installs the sign at Harrodsburg’s newest eatery, the Skillet on Main, which will open on Monday, Nov. 19.

Denise Driscoll is opening the Skillet on Main with her daughter, Heather Reilly.

Driscoll is not new to the area. She has lived in Mercer County since the age of 13 and remembers complaining there was nothing to do when she was a teenager.

“We rode around town a whole lot,” she recalled.

Driscoll has also heard about the difficult atmosphere for new business owners, but she’s not buying it.

“I don’t need the government helping me,” she said. “It’s all about what you make of it. If you’re willing to work, you’ll do great.”

Opening the Skillet is a dream come true for Driscoll, who has been a waitress for 33 years. She said it had always been her dream to open her own restaurant with her daughter Heather.

“It’s always been a dream of hers to open this with me,” Driscoll said.

She credits the late John Landrum with inspiring her to finally go for it.

The Skillet will be open 11 a.m.–8 p.m. Monday through Friday and from 11 a.m.–3 p.m. Saturday and Sunday. Driscoll said they’ll even be open for Thanksgiving. She said they’ve already sold out for the holiday and they haven’t even opened yet.

“There’s no better time to do it than now,” Driscoll said. “It’s a perfect place to do this.”

“If you were a true businessman, you’d be an idiot to move here.”

That statement, made at an August meeting of the Harrodsburg City Commission by developer Chuck Nichols, has reverberated through the community for the past few months, leading to a spirited debate on whether Mercer County has a business friendly climate and what steps the local governments could take to attract new businesses. Last week, the commissioners created an economic development director position to recruit new businesses to Harrodsburg.

But that remark and others criticizing the community doesn’t sit well with many local business owners.

“I’ve got mixed emotions when I read all those comments,” said Chris Caton, owner of CC Auto. “Harrodsburg’s been absolutely great to us.”

Caton started the business in 2012 and it has grown so much he had to build a bigger garage next door to the old one. While they hope to move into the new shop by Thanksgiving, Caton said he gets asked several times a day when he’s moving.

“That’s a good thing,” he said. “That means they’re interested.”

“It doesn’t matter where you decide to open your business,” he said. “If you treat people right, generally speaking, you won’t have a problem.”