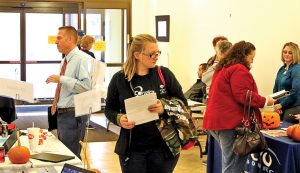 Over 90 people showed up for the recent job fair held at the Mercer County Public Library.

Library Director Robin Ison said over 90 people had walked in by 2:30 p.m.

There, job hunters could talk or fill out applications with over 32 agencies that were either looking for workers or were providing services to help them transition from one job to another.

Out looking for workers was Dennis Davis, superintendent of Mercer County schools. Specifically, he was looking for bus drivers. The district is offering a $500 signing bonus to prospective drivers. Starting pay for the four hour per day position is $14.09 per hour. To cover the shortage of available drivers, the school system has had to merge routes, with the end result that students are getting home as much as an hour later.

During the job fair, Davis said he had six bus driving applications as well as five food service applications.

“I’m giving them out to anybody and everybody,” Davis said.

While the unadjusted seasonal unemployment rate in Mercer County was 4.0 percent in August, according to the Federal Reserve, it is an uncertain time economically. While the Commerce Department has estimated that the gross domestic product increased at a 3.5 percent annualized rate during the third quarter—fuelled largely by government spending and increased consumer spending—home sales dropped 5.5-percent in September. Ford Motor Company, the nation’s second largest manufacturer of cars and trucks, is looking to eliminate 12-percent of their global workforce, over 25,000 jobs.

Locally, 100 workers at the Hitachi Automotive Systems Americas Inc. Harrodsburg plant were laid off last month, which was attributed to flattened sales and changing technology.

“The library staff has done a wonderful job,” Gibson said.

The library is also holding a help fair for anyone applying for aid on Friday, Nov. 2, from 1 p.m. through 4 p.m. Assistance will be available to those needing help filling out paperwork or those unaware of the different programs available.