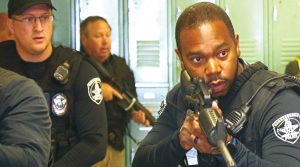 A live shooting drill at Burgin Independent School was interrupted by a real emergency when an officer suffered a heart attack on Saturday, Oct. 20.

Dep. Bill Cruce had to be transported to Ephraim McDowell Medical Center in Danville after suffering chest pains. Mercer Sheriff Ernie Kelty said Cruce—a retired teacher who went through police academy this year in order to begin a second career as a full time sheriff’s deputy—was in good condition and was scheduled to be released from the hospital on Wednesday.

Student volunteers, staff, law enforcement and medical personnel were running through a live shooting scenario that had been planned for several weeks. While the drill predated the recent incident in Anderson County—in which 20-year-old Dylan Jarrell was arrested while backing out of his driveway with a firearm, more than 200 rounds of ammunition and a Kevlar vest after threatening to shoot up a local school—the incident had illuminated the need to be more prepared.

Officials from Mercer and Boyle Counties as well as Frankfort came together to make the training exercise as realistic as possible. The student and staff volunteers spent hours in makeup but were give no direction fin how to react.

The exercise kicked off at 9:04 a.m. with a mock shooter, played by Capt. Scott Elder of the Mercer County Sheriff’s Office, firing blanks in the school gym. Law enforcement arrived within six minutes and the mock shooter was taken down within 20 minutes of the first shot.

Officials then gathered all participants in the gym to hear feedback from parents, volunteers and staff.

“This experience is a real eye opener for teachers and staff,” said Chris LeMonds, principal of Burgin Independent. “The kids and staff did a great job. They did what we trained them to do.”

One of the major concerns raised after the drill was about cell phone reception in Burgin and the lack of ability for school officials and staff to use their cell phones to call 911 during an emergency. LeMonds said it was important to give dispatchers up to date information and cell phone accessibility could increase the information.

Dennis Davis, superintendent of Mercer County Schools, reminded participants that there has never been a person harmed behind a locked door in any school attack.

“This exercise is not just for school attacks, we want kids to have the life skill of situational awareness,” said Davis. “Things happen too fast and students need to be aware of their surroundings.”

McFerron said a lot of information was gathered during the exercise as well as at the feedback meeting afterward. The information will be used to better prepare for emergencies. McFerron also commended the feedback from parents, students and staff saying it was invaluable to preparedness.