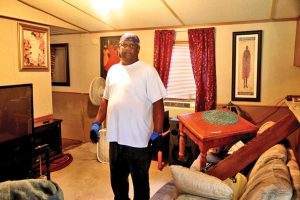 Burgin resident Herman Jasper is trying to clean up his home, which was damaged in last week’s torrential rains.

The flood waters have receded and the cleanup has begun. But many Burgin residents are wondering, why it did it get so bad in the first place?

“This place is a disaster,” said Herman Jasper.

Jasper is the owner of the flooded trailer on West Mill Street in Burgin which was pictured in last week’s front page of the Harrodsburg Herald. Jasper stayed with a friend during the flooding, which was caused by heavy rains on Sept. 9. Now that the waters have retreated, he has returned to his home of 12 years to begin cleaning up.

“I just don’t know where to start,” he said. “My hot water heater is gone, my dryer is gone.” In addition, there is mold everywhere. Jasper has lived in Burgin for 15 years. He said the flooding has only been this bad once before. He said he has no insurance.

“I’m retired with a fixed income,” he said. “You can’t afford that flood insurance.”

He said he had spoken with Mercer County Emergency Management Director William McFerron on Monday.

“He referred me to the Red Cross. They helped me a little bit, but there’s only so much they can do,” he said. “I’m basically homeless. 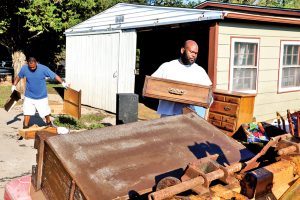 Daricoe Bowman and Davelle Smith toss flood debris in Mayor George Hensley’s backhoe Tuesday. The mayor is asking residents to set their damaged furnishings outside their homes, and he will pick it up with his backhoe.

This is not the first time this year that large parts of the city have been underwater. Flooding in February led Mayor George Hensley to proclaim the city a disaster area. At one point, three pumps were operating on Water Street.

Alvin White, a Burgin native who’s lived on Maple Street since 1999, said the pumps had not arrived until Wednesday, after a group of residents demanded action at a Burgin City Council meeting the night before.

White was among the residents who attended the meeting. His home was undamaged and he has been helping clean away storm debris at Little Zion Baptist Church. While he’s grateful the waters have receded, White said the flooding wouldn’t have been so bad “if they’d done something earlier.”

Mayor Hensley, Burgin Police Chief Casey Rucker and several volunteers were tossing debris into a dumpster at Little Zion Tuesday morning. The dumpster was donated by the Mercer County Fiscal Court, but other than that, Hensley said they have received no help at either the state or federal level. He said previous promises for aid have not amounted to much.

“I’m at my wit’s end trying to get something from Frankfort or the federal government,” he said. “I’m getting tired of talking at them.”

The Department of Homeland Security provided a pump to during the last flood and promised to give the city a pump permanently. “When that truck left the city limits, the pump went with it,” Hensley said.

Noting the upcoming election, he said politicians were eager to come to Burgin to find a vote, but when it came to dealing with the flood damage, “Ain’t none of them darkened our door.”

Hensley, who is donating his time and his equipment to the city free of charge, said he is concentrating on cleaning up the damage right now, including spraying for insects and washing down the streets.

But some are worried about more flooding in the future. Many residents blame the flooding on blasting done by contractors installing Burgin’s sewer system. James Dunn, chairman of the board of directors for the Mercer County Sanitation District, said he didn’t know if sewer construction was to blame.

“I’m not an engineer,” Dunn said. “All we can do is get the engineers from the Department of Water to come and look at it.”

“I really doubt they’re going to place the blame on somebody,” said Little Zion Pastor Phil Yates. At last week’s city council meeting, Yates wondered why the city hadn’t been more aggressive in trying to control flooding, especially after the incidents earlier this year.

“We should have been more proactive,” said Yates, who asked if the city had considered taking legal action. He said a lawsuit, or at least the threat of one, might finally make someone take action.

“Sometimes we have to be forced to do it,” Yates said.

Burgin isn’t the only place hit hard. Authorities in Rowan County finally found a child who had been swept into a culvert by the floodwaters. On Sunday, that remains of Bryce Combs were discovered more than two miles away from his home, according to the Associated Press.