Will Retire Debt On Library Building Next Year 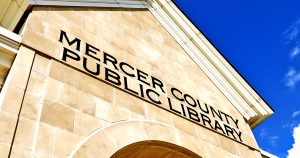 Officials from the Mercer County Public Library are defending themselves from charges of sitting on taxpayers money. A look at the library’s 2019 financial disclosure report shows they had a $3.2-million carryover from the past fiscal year, but that number is only part of the story, officials say. The library has been saving up money in order to retire the debt service on their new building, they say.

It’s tax season, when the taxing districts here in Mercer County and across the commonwealth set their new tax rates. As in years past, it has led to a discussion on what the districts do with the tax money. This year’s discussion has been especially acrimonious.

One of those taxing districts is the Mercer County Public Library, which was accused by Harrodsburg City Commissioner Marvin “Bubby” Isham of sitting on as much as $5-million during last week’s city commission meeting.

Like the other special taxing districts, the library has to file their budgets, audits and financial disclosure forms with the Department of Local Government, who post the reports on their website. However, library officials say the public doesn’t have the whole story.

“That’s not necessarily the money we have in the bank,” said accountant Noel Turner, who handles bookkeeping for the library. “It may not be reported correctly.”

Library officials are currently in discussions with the state about the carryover amount, which they say does not reflect their true financial situation. Turner and Robin Ison, executive director of the public library, say the number includes the property owned by the library.

“I get frustrated with that figure,” Ison said.

Even excluding the property, the library still has an eye-popping amount of cash reserves. However, Ison said the library plans to retire the debt on their new building by fall 2019, 10 years ahead of schedule.

“Our goal was to pay it off in 10 years and that is exactly what that money is for,” Ison said. “The majority of the financing was done by the people of Mercer County. I think we should be proud.”

“You have to try to strategize,” she said.

Every year since, the library has reduced their tax rate, usually by one tenth of a percent. This year’s rate is 8.1 cents per $100 in assessed value on both real estate and personal property.

“We’ve tried to keep lowering it every year,” Ison said.

That rate may continue to drop once the debt service on the library building has been retired, Ison said.

Many people have been complaining about the lack of investment, especially in downtown Harrodsburg. It is harder to find another organization or government entity who has invested more in the downtown area over the last decade than the library. In addition to the new building, they also purchased the house next door two years ago. Ison said the board of directors—who are all Mercer County residents, Ison points out—are currently evaluating what they are going to do with the property. One proposal is to expand parking, which would not only benefit the library but downtown merchants.

In addition to serving as a resource for the citizens of Mercer County, the library also serves as its public face, as an informal information booth. Ison said tourists often stop by the library to learn more about Harrodsburg and Mercer County.

Ison has been with the library for 25 years. She has served as director for 22 years. She’s proud of the steps the library has taken during her tenure.

“Our goal is to serve the whole community,” she said. “It would be hard to put a monetary value on that.”