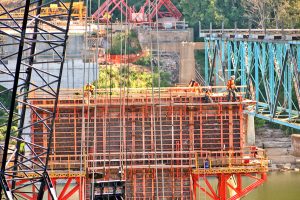 Walsh Construction employees work on the pier located on the Mercer County side of Herrington Lake.

There may be some good news to local businesses, commuters and tourists who have been left high and dry since the Kennedy Mill Bridge was closed earlier this year.

Negotiations to accelerate construction of the replacement are still continuing between the contractor and the state. If both sides can reach an agreement, there is a possibility the new bridge could be completed before the contracted completion date, said  Kevin J. Buch, P.E., the project manager with Walsh Construction Company, who are building the new span.

If the state agrees to accelerate the project, “We’ll be looking at an early summer opening,” Buch said.

The contracted completion date is November 2019.

Even though the weather has played havoc with the construction schedule, Walsh crews—who are working 16 hour 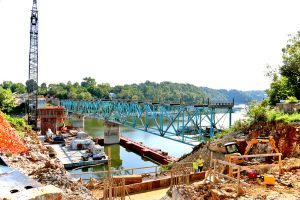 Walsh Construction Company is in negotiations with the state to accelerate construction of the replacement for the Kennedy Mill Bridge. If both parties can come to terms, it’s possible the new bridge could be finished before the contracted completion date of November 2019.

days, six days a week—have almost finished work on pier one, on the Garrard County side. Buch said they will make the final pour of concrete this Thursday.

Crews have also resumed work on the pier on the Mercer County side. Buch said they have almost finished excavating rock from the site. Delivery of the big girders for span one, which will connect the pier to the Mercer County shore of Herrington Lake, is scheduled for September, Buch said.

Work continues on demolishing the old bridge, which was shut down earlier this year.

Walsh is reconfiguring the barges and cranes to start pulling out the rest of the bridge’s steel skeleton at the end of this month.