City Leaders Will Meet With Contractors 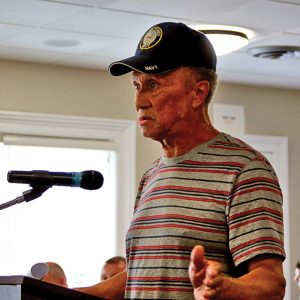 John Harris is one of the property owners complaining about damage to their lawns after utility work. “You can’t even run a power mower through it,” Harris said Monday night.

Complaints about property damage are sprouting like weeds across Harrodsburg.

Several local property owners came before the Harrodsburg City Commission to complain about the mess left behind by contractors working on the city’s sewer system.

“I’d like to present this problem about my yard,” said Nancy Conley, who lives on College Manor. Conley said contractors hired by the city had torn out her yard in order to install a pump station, but they didn’t do a good job cleaning up after themselves, she said. Where there were once rolling green lawns there are now muddy fields covered with straw.

“It’s a mess,” Conley said. Even after repeated visits by the contractors, she wasn’t satisfied. “It looks worse than it ever has.”

She said the workers had replaced her yard with clay, which is now full of weeds but no grass. Before the contractors she hadn’t had so much as a dandelion in her lawn.

On top of that, the work crews left a backhoe and other equipment in her yard for over six weeks, she said.

John Harris, who also lives on College Manor, also complained about his yard. “You can’t even run a power mower through it,” Harris said. 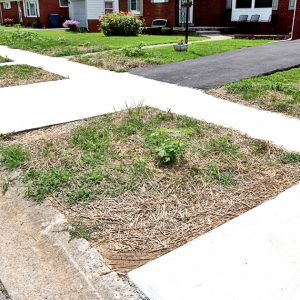 Kenneth Jones, who lives on West Broadway, complained about cracks in the new sidewalk, which he said would not make it through another winter.

“It’s going to bust up,” he said. Jones said the contractors failed to fulfill their promise to return and fix the sidewalk.

City leaders said they would talk to the contractors. “There are situations that need to be addressed and they will be, said Commissioner Charlie Mattingly, who oversees the public works department, “one way or the other.”

The city has held back funds from the construction project which will not be released until all the cleanup work is finished, said Mayor Eddie Long. Long said he would be meet with the project’s lead engineer next Monday. He told the citizens to let him know if the contractors had not made repairs to their satisfaction before the end of the week.

“If they’re not here before the week is over, let us know,” Long said.

The next meeting of the Harrodsburg City Commission will be Monday, Aug. 13, at 7 p.m.