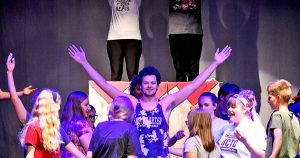 Devin Casey, who plays the lead in the Ragged Edge’s production of “Joseph and the Amazing Technicolor Dreamcoat” is at the center of all the action.

“Who wants to be my sacrificial lamb?”

Freida Gebert is directing the Ragged Edge Community Theatre’s production of “Joseph and the Amazing Technicolor Dreamcoat,” a retelling of the story of Joseph from the Book of Genesis. And anyone who remembers Sunday school remembers what Joseph’s brothers did to the goat.

However, when Gebert asks for a victim, there is a sea of hands in the children’s choir, who have been sitting quietly waiting for their next cue. When Gebert makes her choice, the lucky victim skips across the stage, chanting, “I get to be a goat. I get to be a goat.”

Putting together this musical—written by Tim Rice and Andrew Lloyd Webber, the authors of “Jesus Christ Superstar,” “Evita” and “Phantom of the Opera”—is like sewing together a coat of many colors. There is music and lighting and choreography. There are dozens of people on the stage at all times and every single one of them has something they need to be doing in every scene, and it’s hard to keep track. Are you one of Joseph’s brothers? Or are you an Ishmaelite? Are you Mr. Potiphar or the Pharaoh? Are you a member of the children’s choir, or a goat? 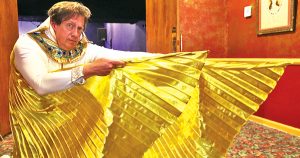 In “Joseph and the Amazing Technicolor Dreamcoat,” Mark Gebert plays Pharaoh more like Elvis Presley than Yul Brynner. “I get to have a lot of fun playing the King,” Gebert said.

Then there are the costumes. Joseph’s “Amazing Technicolor Dreamcoat” is on special order and hasn’t arrived yet. The only costume the production does have is Pharaoh’s, who is more like Elvis Presley than Yul Brynner.

Mark Gebert, who plays Pharoah, gets into his costume, a rhinestone jumpsuit with a Captain Marvel cape.

“You have Elvis in the middle of a Broadway musical,” Gebert said. “I get to have a little fun playing the King.”

Details like this is what has made “Joseph and the Amazing Technicolor Dreamcoat” one of the most produced musicals of all time.

And now it’s coming to Harrodsburg, and while every detail isn’t perfect right now, the Ragged Edge won’t give up. The all-volunteer cast will work until they drop. Because we’ve read the book and they come out on top