Even though it’s been nearly two weeks since the Republican-led General Assembly passed a budget over Gov. Matt Bevin’s veto, many school districts and local governments are still unsure of how to plan for the upcoming fiscal year.

“We’re still finding things we didn’t know were in there,” said Dennis Davis, superintendent of the Mercer County School District. Dennis said he and other school officials were in contact with state officials about the budget “almost daily.”

Retirement is still a big issue. While the legislature passed a law allowing schools—as well as county and city governments—to phase in a 28.05 percent increase on contributions they make to CERS (County Employees Retirement System) over the next 10 years, the governor still hasn’t signed it into law.

As a result, CERS administrators have not released a new rate schedule yet. In the case of the school district, their contribution could be increased by $350,000 or $9,000 in the next fiscal year.

“We’re going to budget on the safe side,” Finance Officer Amber Miner told the Mercer County Board of Education at their meeting last week.

Despite the continued uncertainty, administrators called the new budget a massive improvement over the called governor’s original proposal, which slashed spending for school transportation and text books.

The state government already cut $371,207.62 in funding for Family Resource and Youth Service Centers (FRYSC). The governor’s proposed budget included further cuts of $2 million a year over the next two years.

“I am, of course, relieved that FRYSC funding was protected and restored,” said Cindy Brown, Family Resource Center Coordinator at Mercer County Elementary School. Brown said the final approved budget added $4.1 million in fiscal year 2018 and $9.7 million for both years of the budget cycle.

“I can now plan supplemental programs that would have been cut had the funding level not been restored,” she said.

The new budget sets SEEK (Support Education Excellence in Kentucky) funding at $4,000 per student. Mercer expects to receive nearly $10.5 million in SEEK funding, but it’s not all good news.

The state uses a formula based in part on attendance and assessed real estate values to allocate SEEK funds to local school districts. However, the Kentucky Department of Education did not receive the required information from the Mercer County Property Valuation Administrator’s office in time, Miner said. School officials also believe enrollment may be better next year than current forecasts.

Another thing that worries school officials is the resignation of Education Commissioner Stephen Pruitt last week. According to an Associated Press report, Pruitt was forced out by the governor and replaced with Wayne Lewis, who was one of the architects of Kentucky’s charter school law.

John “Bam” Carney, the Republican chairman of the state House Education Committee, told the AP he believed Pruitt was forced out because he refused to recommend a state takeover of Jefferson County Public Schools.

Davis said Pruitt “had a true heart for kids.”

The next meeting of the Mercer County Board of Education will be at 5:30 p.m. on Thursday, May 17. 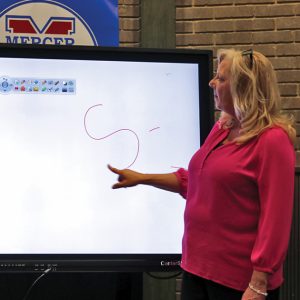 A salesperson demonstrates the new interactive LED blackboards that will be installed in Mercer County classrooms.