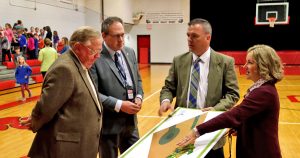 Clockwise from left: Robert Clark, chairman of the Burgin Board of Education, and Robert Augustine, a field representative for Sen. Rand Paul, learn about the proposed renovations to Burgin’s playground from Superintendent Will Begley and Crimson Claycomb, executive director of the Kendyl and Friends Foundation.

March is shaping up to be a big month for the Kendyl and Friends Foundation. Not only have they raised nearly all of the money to make  the playground at Burgin Independent School handicapped accessible, they are behind a law that could make all new playgrounds in Kentucky accessible to everyone.

On Monday, Crimson Claycomb, founder and executive director of the Kendyl and Friends Foundation, said they nearly raised all of the $134,000 needed to renovate Burgin’s playground. Claycomb said she had come up with her best fundraiser yet to collect the last $3,000.

“You guys are going to like what we have planned,” Claycomb told Burgin students. The campaign will allow students to pick which administrative staff member— either Superintendent Will Begley, Principal Chris LeMonds, Assistant Principal Matt Grimes, School Secretary Erica Sexton or Guidance Counselor Sarah Steele—will have to dress up as the opposite sex for one school day.

Students will be able to make donations into one of five jars in the school office before Friday, March 23, the last day of school before spring break. When students return to school, the victim—err, the winner—will have to dress up, including hair, makeup and high heels for the men and mustaches for the women.

March is Cerebral Palsy Awareness month and it’s always a big month for Kendyl and Friends. The foundation’s namesake, Crimson Claycomb’s daughter, Kendyl, suffered a brain injury at the age of three weeks that has left her with cerebral palsy, among other disorders.

When she first got sick doctors said she wouldn’t live to be two months old. Kendyl turns eight this November. Her parents were told she’d be a vegetable, but Kendyl loves people and, like all kids, she loves to play.

Claycomb has been recognized for her efforts on behalf of the handicapped. In a letter, Sen. Rand Paul called Claycomb’s work raising awareness of the need for handicapped-accessible playgrounds “a powerful message for us all.”

Despite accomplishing so much in not much time, Claycomb is still not satisfied. On Wednesday, a bill will be introduced in the state legislature requiring all new playgrounds built in Kentucky to be handicapped accessible.

“It should not be a requirement to have to raise funds,” said Crimson, who said making playgrounds available to everyone regardless of disability “should be mandatory.”