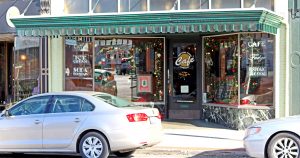 Last week’s robbery has not soured the owners of the Kentucky Fudge Company on Mercer County. “This hasn’t changed our faith in the community,” said Tim Kazimer.

A reward of up to $1,000 is being offered for information leading to the arrest and conviction of the burglar who hit Kentucky Fudge Company last week.

On Tuesday, Dec. 5, the burglar made a forcible entry into the historic building, causing significant damage to custom made windows. The bandit stole three cash drawers containing $387 in cash as well as 27 bottles of bourbon, 16 bottles of vodka, two bottles of tequila, one bottle of whiskey, and one bottle of rum. All together, the thief made off with 47 bottles of top shelf alcohol valued at $964.32.

There is still no estimate for the damages to the building, the police said.

The area behind the Fudge Company is under surveillance by several video cameras, but police said the burglar wore a mask. They said the same burglar also made unsuccessful attempts to break into two other establishments along Main Street.

Police were called in at 5:16 a.m. Tim Kazimer, who owns the Fudge Company with his wife, Jennifer, and lives upstairs from the restaurant, said they slept through the whole thing.

“We’ve never had anything even close to this,” Kazimer said.

The Kazimers are originally from Ohio. Twelve years ago, they purchased the old Rexall Drugstore on Main Street from the James Harrod Trust and spent months cleaning and restoring the historic structure, adding bathrooms and plumbing. Since they opened the restaurant, it has become a Mercer County institution, with people from all over the area “stopping at the Fudge” for a roast beef slider or a bowl of chili.

“This is the worst time it could have happened,” Tim Kazimer said, before adding, “This hasn’t changed our faith in this community.”

The couple is grateful for the support they’ve received from their neighbors, but they’d like to see the burglar arrested.

“I think justice will be served one way or another,” Kazimer said.

This case remains under investigation by Patrolmen Aaron Miller and Thomas J. Wren of the Harrodsburg Police Department. Call them at 734-3311.

Mercer County Crime Stoppers is offering a reward of up to $1,000 for the arrest and conviction of the burglar. Crime Stoppers wants your information, not your name. Call 812-0016.