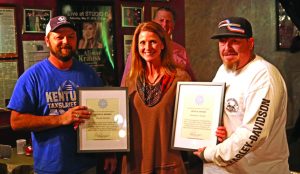 Chuck Nichols, left, and Brennan Sexton, right, were presented the outstanding business renovation award for their efforts to restore the Trials and Grace tattoo parlor. (Photo by Robert Moore)

The Harrodsburg First Main Street Program held  their annual awards dinner Thursday night, where they honored the businesses and property owners who make downtown Harrodsburg that rarest of things in rural Kentucky: a viable business district.

“We are really blessed,” said Greg Souder, chairman of the Harrodsburg First board of directors. “I can’t stress that enough.”

Souder said downtown Harrodsburg survives because everyone works hard to keep it alive, volunteering their time and money. “That’s 80-percent of the battle,” he said, “just showing up.”

Since Harrodsburg First was founded in 1986, over $36 million has been invested into the downtown district through public-private partnerships, he said.

Over the last year, downtown has gained two new businesses.

Eight downtown buildings have received significant renovations through Harrodsburg First’s facade grant, which is funded by the sale of the Diamond Point Welcome Center to the Harrodsburg-Mercer County Tourist Commission. This year alone, Harrodsburg First has distributed $48,000 in facade grants, which has led to $136,900 being invested into the community.

But by far, the biggest thing Harrodsburg First did this year is Oktoberfest. Souder said there is no official count for how many people attended, but visitors came from as far away as Iowa, North Carolina, Pennsylvania and Ohio.

None of it would be possible without volunteers who go “above and beyond,” Souder said.

The first award, the volunteer award, went to Joan Huffman, the former interim director of Harrodsburg First. Huffman, along with Vickie Bottoms and Jim Sprague, is leaving the board of directors this year.

The award for outstanding business renovation went to Brennan Sexton and Chuck Nichols. Sexton owns the Trials and Grace tattoo parlor on Main Street while Nichols owns the building in which it’s located.