“The pension system is the issue, but the overall issue is saving our education system,” Davis said.

Gov. Matt Bevin’s plan calls for new teachers and teachers with 27 years of service to be switched to defined contribution plans. Even though Bevin and other Republicans have said the plan would earn teachers up to 17 percent more than traditional plans, Davis said the proposal does not provide for a stable retirement.

“All the retirement would be in a 401 (a) tied to the stock market,” he said. “If they retire when things are good, they could have a lot of money. If the market crashes, they could have nothing.”

It would leave teachers, who are not eligible to collect Social Security, vulnerable to the whims of the market. “You’re putting everything in one basket,” Davis said.

“It does keep the inviolable contract in tact, but there are some sacrifices teachers will have to make over the years,” Davis said.

Most importantly, he said, the proposal would keep teachers in a defined benefit program. Davis said the governor’s proposal would cause a shortage of teachers even greater than the one schools already face. If every teacher retires when they’re eligible, Mercer County will lose a quarter of the teaching staff by 2023, he said, as well as two thirds of school leadership.

“Once you hit 27 years, there’s not an incentive to work longer,” Davis said.

The governor’s proposal would also make recruiting teachers more difficult, especially in fields like math and science, where few qualified applicants—who can make more money in the private sector or with larger school systems—apply.

The Shared Responsibility Plan would help schools recruit teachers by keeping them in a defined benefit plan. And it would not cost taxpayers any more than Gov. Bevin’s proposal, Davis said.

Some Republicans have said the governor will not call a special session for pension reform until after Thanksgiving. Davis said  it is important all school employees have a say on the issue.

“If it’s called during school time, we will dismiss school to allow employees to go to Frankfort and voice their concerns,” Davis said. “This day will be made up either throughout the year or at the end of the year.”

“The longer it goes without the special session being called, the less likely it is,” said Ric Maxfield, chief of the Harrodsburg Fire Department.

However, the confusion and doubt about the future of Kentucky’s retirement system still affects his department.

“The uncertainty makes it difficult,” Maxfield said. “If a firefighter stays and they change his pension benefits, what could he lose?”

“This job takes a toll,” said Maxfield. “Thirty-five years on a tail board is hard on your body.”

The chief said what the government manages to save on retirement costs it will lose in retirees’ health costs. Firefighters forced to work longer will be in worse shape when they retire, and medical costs will escalate, he said.

“It’s going to cost you one way or the other,” Maxfield said.

Maxfield is one of five firefighters who still pays into the hazardous pay system. Since 2014, new firefighters have been paying into a hybrid defined benefit/defined contribution plan.

The chief has announced he will be retiring in December after spending nearly 20 years with the Harrodsburg Fire Department. 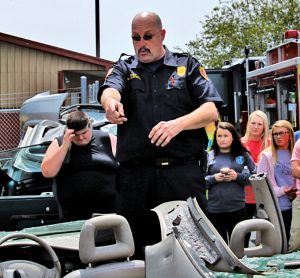 Harrodsburg Fire Chief Ric Maxfield points out the weak spots on a car during an extrication drill this summer. Maxfield is retiring after more than 19 years of service.

“I’ve always been in public service,” he said. “But I’m concerned about the financial security of my family.”