The controversial project to build a medical clinic on South College Street appears to have flat-lined.

The City of Harrodsburg Board of Commissioners voted against changing the zoning at 684 S. College Street to business. The owner, Ritchie McGinnis, was seeking to change the zoning for the property from residential to business to allow Fast Pace Urgent Care to build a clinic there. The zoning change was opposed by residents of the nearby Elizabeth Court subdivision.

In September, the residents voiced their displeasure about the idea at Harrodsburg-Mercer County Joint Planning and Zoning Commission, who refused to recommend the zoning change.

Many of the residents also showed up Monday night to make their voices heard, but Mayor Eddie Long told them before the meeting that it was a straight up or down vote based on the Zoning Commission’s recommendation.

“Tonight we’re not allowed to hear any more evidence,” Long said. If the commissioners chose to disregard the zoning commission’s decision, there would have to be a public hearing. In that case, “Everybody will get a chance to say what they want to say,” the mayor said.

However, Long and Commissioners Charlie Mattingly and Jack Coleman voted to follow the recommendation and deny the zoning change.

After the vote, Mayor Long told McGinnis his next move was in circuit court.

On Tuesday morning the realtor said he wasn’t sure if the developer, Palm Development Partners of Nashville, Tennessee, would pursue the case any further.

“I really don’t know,” McGinnis said. “My gut feeling is he won’t want to take it to court, but he hasn’t said one way or the other.”

McGinnis said the developer had been unable to find another location in Harrodsburg and they might move on to another community. Fast Pace currently has over 60 locations in Tennessee and Kentucky. “This is the first time they’ve run into any kind of resistance,” McGinnis said.

He said he was unsure what to do with the 60-year-old house, which sits across the street from McDonald’s. 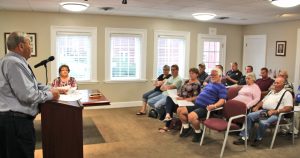 Mayor Eddie Long addresses Elizabeth Court residents who came to city hall to voice their opposition to a proposed urgent treatment center at the entrance to their subdivision.