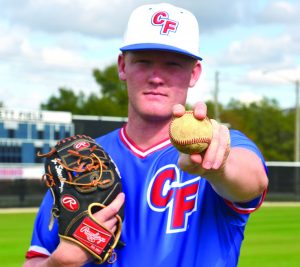 Jackson Stoeckinger played for the Titans from 2012-2014 after transferring from Henry Clay his sophomore year. (Photo by Berry Davis, College of Central Florida)

The closest most people will ever get to being drafted by a professional sports team is when their video game loads up, but the Washington Nationals turned former Titan Jackson Stoeckinger’s dream into reality during the MLB Draft.

Stoeckinger is the first ever Mercer County Titan to be drafted by a professional baseball club, after drafted in the 12th round of last week’s draft.

“It’s amazing knowing that I am a professional baseball player now, especially with such a great organization,” said Stoeckinger. “The Nationals see a lot in me and that helps with my day-to-day routine knowing that.”

Stoeckinger played for Mercer County from 2012-2014, and was on the state runner-up team in 2013. Stoeckinger moved to Harrodsburg from Henry Clay and enrolled at Mercer County at the start of his sophomore season. He played for Kentucky High School Hall of Famer Jeremy Shope, who had nothing but praise and admiration for Stoeckinger.

“It didn’t take me long to realize not only did we have a talented player move in, but we also had a wonderful family move in,” said Shope. “Jackson came in and worked his tail off and God blessed him with a good frame and a left handed arm that could work.”

Shope said Jackson was one of the first players to practice and one of the last ones to leave and that he’s always loved and respected the game of baseball.

“I do still keep in contact with Coach Shope. We will always be close,” said Stoeckinger.

Prior to being drafted, Stoeckinger played for the College of Central Florida Patriots (CF). Although he has not finished school, he has received his associate degree in psychology and plans to finish school in the near future.