Hutchins has been named principal at Washington County High School, from which she graduated in 1984.

“I’ve really enjoyed my time here,” said Hutchins, who has served with the Mercer School District for 11 years. “It was a tough decision to leave.”

Hutchins served as principal at Mercer for six years. Before that, she was assistant principal for five years. She said she is proud of the school’s achievements, which include being named a proficient school, increasing the number of students who graduate prepared for college and career as well as three state championships. But she said she’s really going to miss the students and the staff.

“I’ve been here in Harrodsburg for 26 years now,” Hutchins said. “I’ve met a lot of people and developed a lot of relationships over those years.”

But Washington County is “home,” said Hutchins, a former member of the Commanderette basketball team. She said the reason she’s in education is because of the teachers she had growing up.

“It’s a chance for me to get back home and closer to my family,” she said. 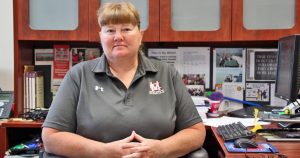 Principal Malissa Hutchins is leaving Mercer County Senior High School for Washington County after 11 years. “I will always be a part of the Titan family,” Hutchins said.